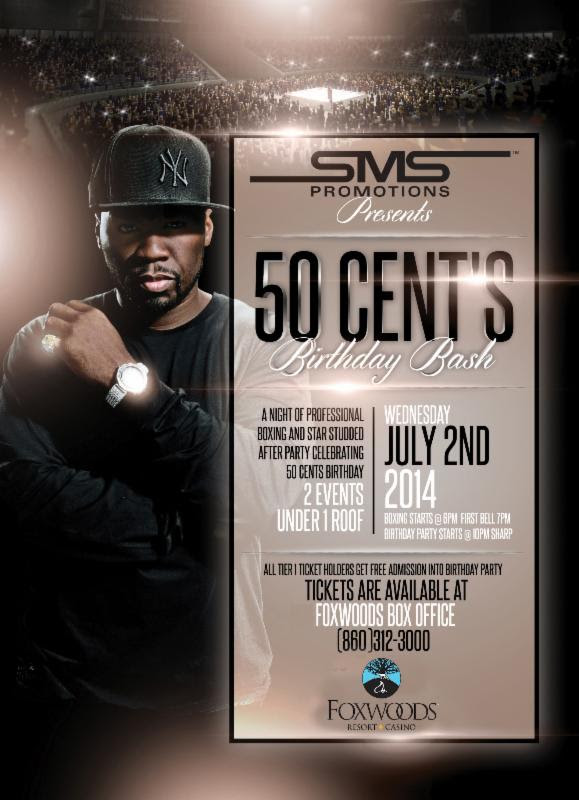 50 Cent will celebrate his birthday with a bang on Wednesday, July 2 as his company, SMS Promotions, presents a special edition of ESPN Friday Night Fights at Grand Theater in Fox Tower at Foxwoods Resort Casino in Mashantucket, Connecticut.

The winner of this main event fight will become the mandatory challenger for the winner of the July 10 title match between IBF junior lightweight champion Argenis Mendez and challenger Rances Barthelemy.

50 Cent, who owns a mansion in Farmington, Connecticut, is going home to celebrate his 39th birthday, technically speaking four days early, along with a star-studded list of friends and fans at a party in Foxwoods starting at 10 p.m. ET for those not attending the fights. All Tier 1 ($100.00) ticket holders will be entitled to free admission to 50’s birthday party.

“I’m on the road constantly so I really enjoy coming home to Connecticut to celebrate my birthday with my family and friends,” 50 Cent said. “I had so much fun last year that I had to make it an annual event. It’s going to be fantastic!”

Davis is a 27-year-old pure boxer. Fighting out of Cleveland, he had more than 200 amateur bouts, highlighted by his gold medal winning performance at the 2005 U.S. National Championships.

Farenas is a battle-tested veteran from the Philippines who has never been stopped in 47 professional fights. He lost a 12-round decision to another SMS fighter, multiple world champion Yuriorkis Gamboa, in 2012 for the interim World Boxing Association (WBA) super featherweight title, after fighting WBA super featherweight champion Takashi Uchiyama to a draw in Japan.