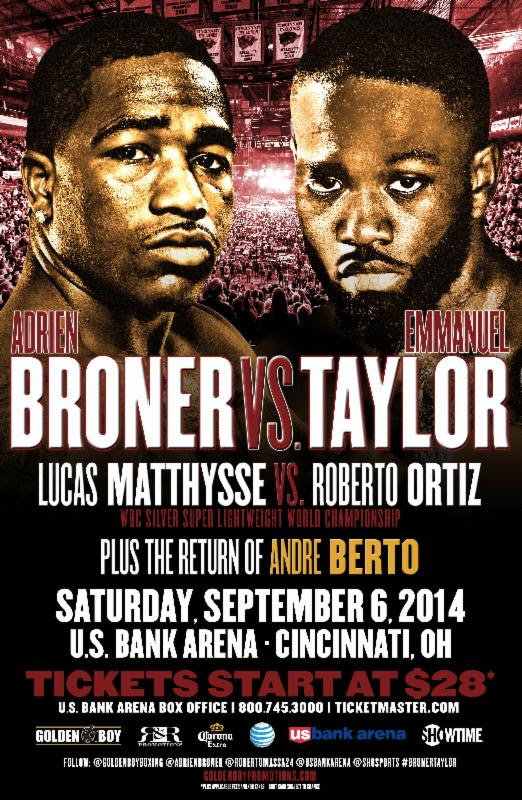 Adrien Broner’s next fight has been made official. The controversial star is coming back home to Cincinnati on September 6th. He’s headlining a Showtime tripleheader from the comfy confines of his hometown, taking on the streaking Emamnuel Taylor. Taylor is coming off a win over Karim Mayfield. 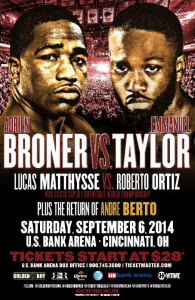 Also on the card, Lucas Matthysse will see action against Roberto Ortiz, and Andre Berto will return to the ring following an extended absence. Berto’s opponent hasn’t yet been made.

There had been murmurs of a potential Broner vs. Matthysse fight. In fact, there had even been (not-very-believable) talk of that falling on the undercard of the Floyd Mayweather vs. Marcos Maidana II bout. With both men being showcased in this event, it’s clear that Golden Boy does indeed want to get Broner and Matthysse into the same ring in the future, but the men won’t be battling it out just yet.

Broner vs. Taylor, a 12-round Super Lightweight bout, will be held on Saturday, September 6, and is promoted by Golden Boy Promotions and sponsored by Corona and AT&T. The event will take place at U.S. Bank Arena in Cincinnati, OH, and will air live on SHOWTIME (9 p.m. ET/PT).