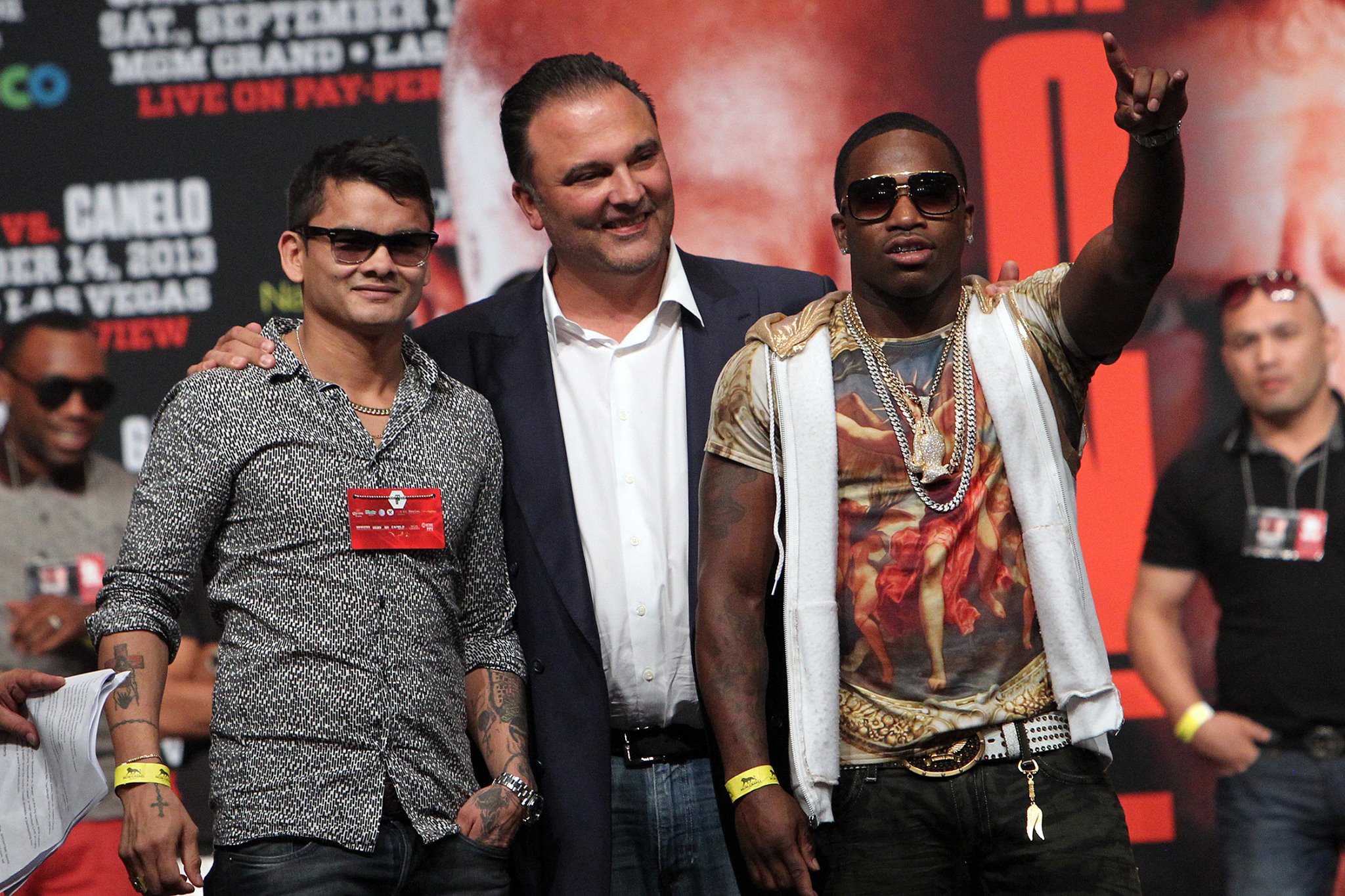 Adrien “The Problem” Broner and Marcos “El Chino” Maidana are set for what will be one of the toughest challenges of each man’s career. On Saturday, Dec. 14, in a Showtime fight to air live from the Alamodome in San Antonio, Texas, the bold and brash Broner and the punching powerhouse Maidana will enter the Danger Zone like never before, with “The Problem” defending his title against the Argentine knockout artist determined to wrap championship gold around his waist once again.

The opening press conference for Broner vs. Maidana was held this afternoon, and each man had some choice words. The stacked card also features Keith Thurman vs. Jesus Soto-Karass, Leo Santa Cruz vs. Cesar Seda, and the returns to action of Victor Ortiz and Beibut Shumenov.

Who will emerge from the Danger Zone unscathed? Will it be the fast and precise Broner or the aggressive and powerful Maidana? The world will find out on Dec. 14.

“Maidana is one-dimensional and not in my league,” said Broner.

“I’m a Ferrari and he’s a go-kart and my fans will see that in my return to Texas. It’s been over four years since I’ve fought there and I’m going to put on a show. Watch me light Maidana up like a Christmas tree on Dec. 14.”

“Everyone knows that Broner has a big mouth, but that doesn’t bother me, because his mouth can’t fight for him,” said Maidana.

“Whether he has the guts to stand in front of me or if he runs I’ll definitely go for the KO and either way, I’m leaving the ring with the belt.”

“On paper this is the classic boxer versus puncher matchup, but Broner is also willing to stand and trade and Maidana can box, so I’m expecting this to be a Fight of the Year candidate to end 2013,” said CEO of Golden Boy Promotions Richard Schaefer.

“There’s a lot on the line for both fighters and I can’t wait to see who comes out of the DANGER ZONE with the belt.”

“With five amazing fights and boxing’s top stars, I can’t think of anyplace better to have this event than in San Antonio,” said President of Leija*Battah Promotions Mike Battah.

“As shown with the Canelo Alvarez-Austin Trout fight, this is a city that loves and supports the sport, and I can’t wait to see the Alamodome filled once again on Dec. 14.”

“This has been an outstanding year for boxing on SHOWTIME, and I can’t think of any better way to end 2013 than with a stacked card like this one. Adrien Broner vs. Marcos Maidana is a dream matchup between two of the biggest names in the welterweight division. Keith Thurman and Jesus Soto Karass are two of the most aggressive, hard-hitting fighters in any division,” said Executive Vice President & General Manager of SHOWTIME Sports Stephen Espinoza.

“We’ve also got one of the sport’s top young fighters in Leo Santa Cruz. Add in the return of Victor Ortiz, and it’s clear that this truly is a can’t-miss event. It’s a pay per view-quality event without the pay per view price tag.”

In the co-main event, one of boxing’s top young stars, Keith “One Time” Thurman, will meet his toughest challenge yet when he defends his interim WBA Welterweight Championship against Mexico’s Jesus “Renuente” Soto Karass.

“Soto Karass is a tough guy, there’s no question about that, and I respect him a lot,” said Thurman.

“But his style is tailor-made for me and I expect to defend my title and win by knockout.”

“But as I proved in my fight with Andre Berto that when I’m on top of my game, no one can beat me. I will become a world champion on Dec. 14.”

Before Thurman and Soto Karass battle it out, the WBC Super Bantamweight Championship will be on the line when defending champion Leo “Teremoto” Santa Cruz battles Cesar Seda.

“I’m looking forward to getting back in the ring and making my debut in Texas against Cesar Seda,” said Santa Cruz.

“Seda is a quality fighter and a top contender, but I’m not ready to give up my belt to him or anyone.”

“I admire Santa Cruz for his talent and his accomplishments, but styles make fights, and I have the style to beat him and bring the world championship back to Puerto Rico,” said Seda.

“I am excited to be back in the ring and to compete on such an amazing event,” said Shumenov.

“It’s been a long time for me, and I’m hungry to beat Kovacs in impressive style and retain my title.”

“It has been my dream to fight in the United States against the best in the world, and on Dec. 14 I finally get my chance,” said Kovacs.

“Shumenov is a great champion, but I am confident in my ability to take his title.”

Plus, in a special 10-round super welterweight attraction former Welterweight World Champion “Vicious” Victor Ortiz makes his much anticipated return to the ring.

“I’m stronger and better than ever at 154 pounds, and the world will see that when the bell rings.”