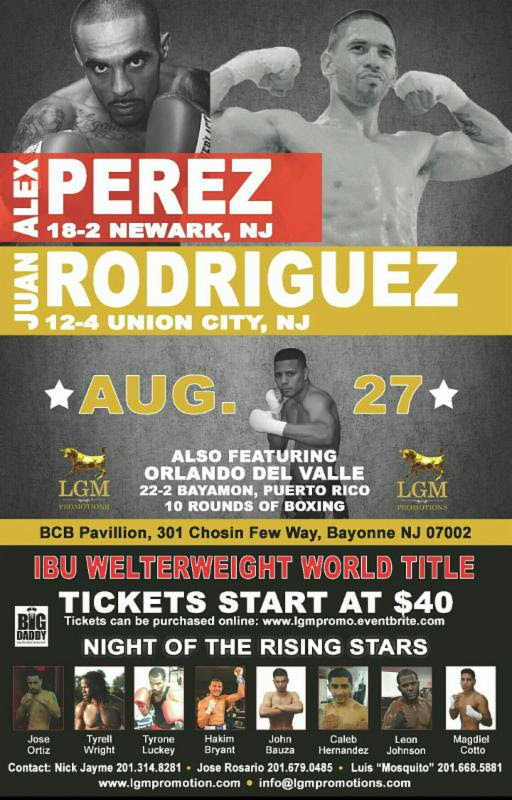 On Saturday night, August 27th, Nick Jayme’s LGM Promotions will be back with a at the BCB Pavilion in Bayonne, New Jersey. In the main event, it will be a battle of New Jersey based welterweights as Alex Perez (18-2, 10 KOs) will take on Juan “The Beast” Rodriguez (12-4, 5 KOs) in a bout scheduled for eight rounds .

This will be Newark native Perez’ return to the ring after an eighteen-month layoff. Perez, 34 years-old turned professional in 2004 and won his first 16 bouts. He has wins over Edy Chavez (1-0), Josh Sosa (10-1) and Francisco Figueroa (20-3). On March 14, 2009 Perez captured the WBC Caribbean Boxing Federation Welterweight title with a unanimous decision over Laureano Laracuente at the Coliseo Luis Aymat in San Sebastian, Puerto Rico.

Perez was last seen in the ring, losing to Brandon Adams in the acclaimed Boxcino tournament on February 13, 2015 at the Mohegan Sun Casino in Uncasville, Connecticut.

The 29 year-old Rodriguez, hailing from Union City, New Jersey turned professional in 2009 and won his first 11 bouts. All four of Rodriguez’ defeats have come to undefeated fighters. In his last bout, he was stopped by Ivan Golub on January 16 at Barclays Center in Brooklyn, New York.

In a 10-round junior featherweight, Orlando “Orlandito” Del Valle (22-2, 16 KOs) will see action versus an opponent to be named in a 10-round bout.

Following a nationally televised unanimous decision victory, in his most recent fight against veteran Thomas Snow on May 13, 2016, in Washington, D.C., Del Valle looks to continue his momentum in the Bayonne ring for a fifth consecutive victory.

The two met twice in 2015 with the first bout being declared a draw, while Luckey took the latest fight via unanimous decision on August 15, 2015 in Jersey City, NJ.

Hakim Bryant (6-0, 4 KO’s) of Asbury Park, NJ will take on an opponent to be named in a middleweight bout.

Adding to the card’s pool of Garden State talent will also be undefeated junior welterweight John “El Terrible” Bauza (2-0, 2 KOs) of North Bergen, NJ to fight an opponent to be named. Before turning pro, Bauza was the number one rated youth amateur fighter in the nation at 141 pounds with his defeat of Philadelphia’s Branden Pizarro at the 2016 USA Boxing Youth Junior Welterweight National Championship in Reno, Nevada.

Also seeing action against opponents to be named will be welterweight Caleb Hernandez (2-0, 1 KO) of Paterson, NJ; and middleweight Magdiel Cotto (4-0, 4 KOs) of Puerto Rico.

Who is next for Conor Benn after knocking out Samuel Vargas?

Saunders: The closest Eubank Jr will get to Canelo is a ringside ticket