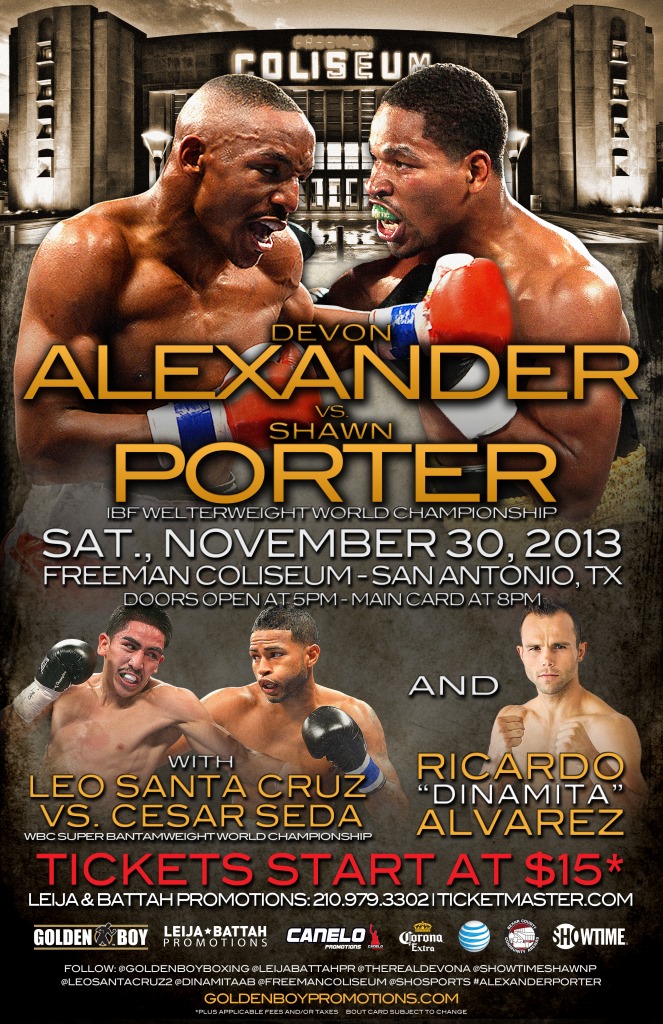 Showtime presents a world championship doubleheader on Saturday, Nov. 30, as Devon Alexander “The Great” defends his IBF Welterweight title against Shawn “Showtime” Porter at Freeman Coliseum in San Antonio, Texas. In the co-main event, the WBC Super Bantamweight title is on the line as Leo “Teremoto” Santa Cruz defends his title against Cesar Seda.

In a preliminary bout, junior welterweight Ricardo “Dinamita” Alvarez, brother of Saul “Canelo” Alvarez, will face an opponent to be named in a 10-round matchup. 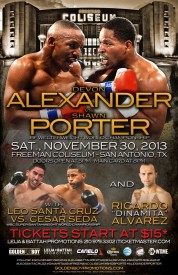 “I’ve heard great things about the fans in Texas and I’m looking forward to defending my title in San Antonio,” said Alexander. “I promise I won’t disappoint the fight fans and they’re going to see a show on November 30.”

“It’s been a long road to get here and ever since I first stepped into the gym, I wanted to become a world champion,” said Porter. “Now my chance is here and I’m ready to step into that ring and take the title from Alexander.”

“I’m looking forward to getting back in the ring and making my debut in Texas against Cesar Seda,” said Santa Cruz. “Seda is a quality fighter and a top contender, but I’m not ready to give up my belt to him or anyone.”

“I admire Santa Cruz for his talent and his accomplishments,” said Seda. “But styles make fights and I have the style to beat him and bring the world championship back to Puerto Rico,”

“The fans in San Antonio are among the best in the sport and when they come out to see Devon Alexander defend his title against Shawn Porter, they’re going to be in for a treat, as this is a great stylistic matchup that will produce compelling action from start to finish,” said Richard Schaefer, CEO of Golden Boy Promotions. “And when you add a championship fight between an all-action champion in Leo Santa Cruz and challenger Cesar Seda this may end up being one of the best nights of boxing we’ve seen in 2013.”

“It’s an honor and pleasure to bring SHOWTIME back to the greatest boxing fans in the world here in San Antonio,” said Mike Battah, President of Leija*Battah Promotions. “Alexander is facing a young, hungry challenger in Porter so this fight will definitely be one of the most exciting fights of the year. Santa Cruz vs Seda is a battle of the countries, Mexico vs. Puerto Rico battling it out will round out the night as a great night of boxing.”

Twenty-six-year-old southpaw Devon Alexander “The Great” (25-1, 14 KO’s) has done his native St. Louis proud, soaring to the top of two weight classes throughout the course of his professional career. A gifted boxer with top-notch punching accuracy and defense, Alexander first wore championship gold after his 2009 technical knockout of Junior Witter earned him the WBC Junior Welterweight title.

Alexander unified the belts in his next fight with a stoppage of Juan Urango and defended them against Andriy Kotelnik before suffering the lone loss of his career against Timothy Bradley in 2011. Alexander got right back into the title picture though, defeating Lucas Matthysse five months later and after a move to welterweight, a win over Marcos Maidana earned him a title fight against Randall Bailey last October at Barclays Center. There, he defeated Bailey over 12-rounds to become a two-division champion. In his most recent bout, on May 18, 2013, Alexander stopped Lee Purdy in seven rounds.

A longtime amateur standout who was an alternate for the 2008 U.S. Olympic team, Shawn “Showtime” Porter (22-0-1, 14 KO’s) found out quickly that his action-packed style was better suited for the professional game and he has the unbeaten record to prove it. A victor over the likes of Hector Munoz, Alfonso Gomez and Phil Lo Greco, this NABF and NABO champion excited fight fans with his recent two-fight series against former world titlist Julio Diaz.

After a draw in their first meeting, Porter pounded out a clear-cut 10-round decision in their September rematch, opening the door for the 25-year-old from Akron, Ohio to challenge for his first world championship.

Boxing’s breakout star Leo “Teremoto” Santa Cruz (25-0-1, 15 KO’s) has already won world championships in two weight classes, despite being just 25-years-old. A native of Huetamo, Mexico now living in Los Angeles, Santa Cruz’s fan-friendly attack in the ring has garnered him followers from around the world. After his 2013 knockouts of Alexander Munoz and Victor Terrazas, the latter victory earning him the WBC Super Bantamweight Championship, he shows no signs of slowing down in his quest for boxing greatness.

San Juan, Puerto Rico southpaw Cesar Seda (25-1, 17 KO’s) first made his name in the fight game with a successful run at 115 pounds. He won the WBA Fedecaribe and NABO titles before losing for the only time in his career against WBO Champion Omar Narvaez in April of 2011. Since that bout, the 27-year-old Seda has gone up in weight and won five bouts straight, two by knockout, earning him a fight with Santa Cruz on Nov. 30.

After a fifth-round technical knockout over Humberto Martinez on Oct., WBC Continental Americas Super Lightweight Champion Ricardo “Dinamita” Alvarez (22-2-3, 14 KO’s) is experiencing a four-fight hot stretch that he hopes will propel him into a world title fight. Currently ranked in the Top 20 by the WBC, the 31-year-old brother of former world champions Canelo and Rigoberto Alvarez, hopes to add a third crown to the family trophy case in 2014.