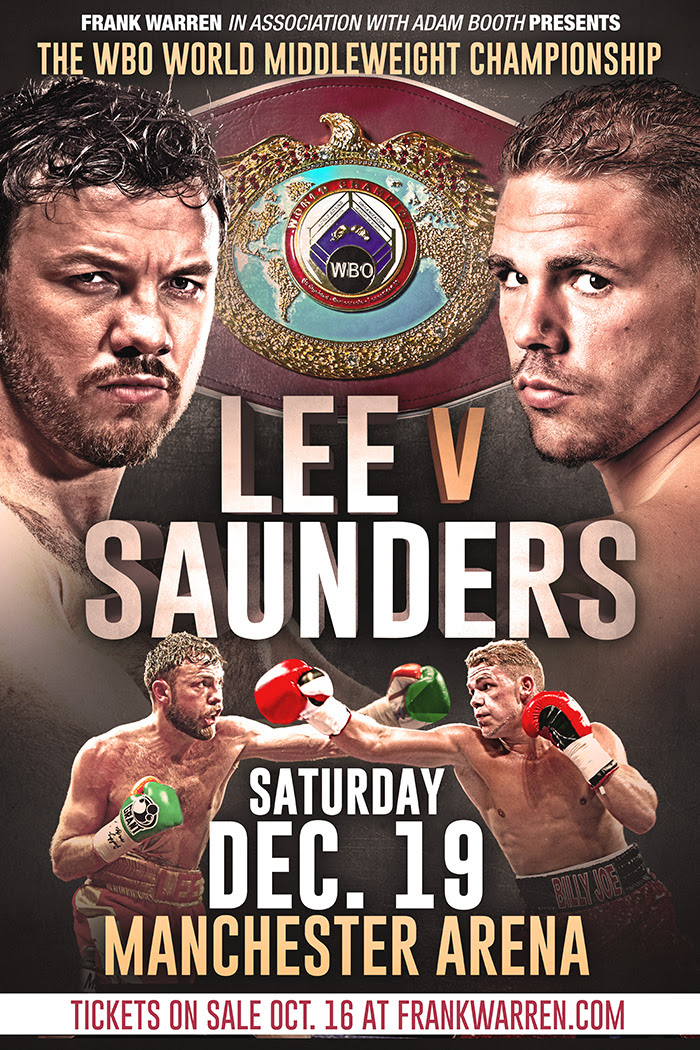 After multiple rescheduling issues, Andy Lee and challenger Billy Joe Saunders will finally collide at the Manchester Arena on Saturday December 19th in a Christmas extravaganza. The 160lb fighters are raring to get in the ring and decide who is the best after seeing two previous postponements of their fight – Lee with a viral infection and Saunders with a cut eye – and both are promising to close the year with an explosive ending. 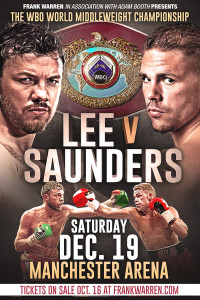 Irish hero Lee has forged his reputation as fans’ favorite with his thrilling sixth round knockout of Matt Korobov last December and then holding top American Peter Quillin to a draw in April. He’s been frustrated with the delay and wants to deal with his English challenger so he can move on in his plans to unify the division.

“The delay in the fight between me and Saunders has just made me more determined, if that is possible. Once I have beaten him on the 19th December I can move on in my career and unify the titles. My fans have been very patient and I’ll give them what they have been waiting for as a Christmas present, beating Saunders and remaining world champion. I’m a proud man and I’m prepared to fight ‘tooth and nail’ to keep my title. Saunders is in for the fight of his life.” Said Lee.

Saunders, the undefeated WBO mandatory challenger, is equally excited to finally get it on with his rival. The slick, hard-hitting southpaw has been even more patient for his shot at the title after he stepped aside to allow Lee to fight Korobov for the world title is ready to claim what he believes is his.

“Like Lee I just want to get in the ring and fight. We’ve talked and talked for months, now we just want to fight. I gave him the chance to fight for the world against Korobov when I stepped aside so now I want my chance. It’s been a long time coming, but it’s here now and nobody is going to stop me. This isn’t going to be a Merry Christmas for him, more like the Nightmare Before Christmas. We’re both fighting men and one of us isn’t going to be standing at the end, and that won’t be me.” Said Saunders.

Promoter Frank Warren is thrilled to end the year with the mouthwatering showdown.

He said, “It’s been frustrating as both Andy and Billy have wanted the fight and the fans and BoxNation viewers’ want to see it, but I’m delighted that it’s set for Saturday 19th December at the Manchester Arena and we’re closing a great year for the sport with a fight that has the makings of a thriller.”

The Lee v Saunders clash ends a great run of middleweight world title fights exclusively live on The Channel of Champions, BoxNation, featuring the elite fighters in the division, starting next Saturday (17th October) with the dynamite clash between Gennady Golovkin and David Lemieux with the IBF, WBA Super, WBC Interim and IBO title on the line. Then on Saturday 21st November it’s a mega-showdown between WBC World Champion Miguel Cotto against Saul ‘Canelo’ Alvarez that reignites the fiery Puerto Rico-Mexican rivalries.

Tickets will go on sale on Friday 16th October at midday.

The Channel Of Champions, BoxNation, will televise live and exclusive on Sky 437/HD 490, Virgin 546 and Talk Talk 415. Subscribe at www.boxnation.com or watch online at Livesport.tv or via iPhone, iPad or Android.