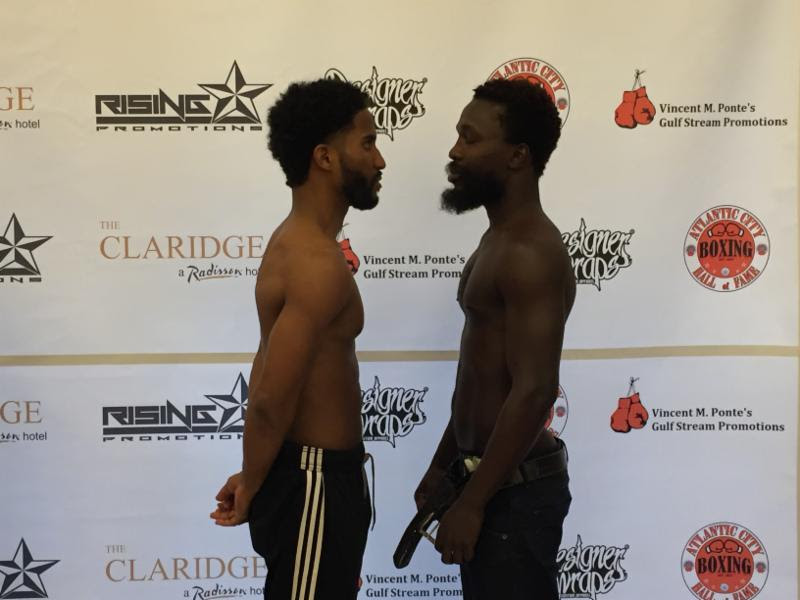 This past Saturday night, welterweight Anthony “Juice” Young registered his 5th consecutive victory as he won an 8-round unanimous decision that highlighted a 7- bout card at The Claridge Hotel in Atlantic City.

The card was promoted by Rising promotions, which staged it’s 7th consecutive card in front of a capacity crowd at The Claridge.

“It’s bitter sweet knowing this was my last event. This show was a great way to end the #ACFightNight series. Awesome crowd, great fights and dramatic endings. It’s now time for me to focus on my fighting career and continue my path to become a world champion,” said Thomas LaManna of Rising Promotions.

Young controlled action against the tough veteran, and Young was able to win in shutout fashion by scores of 80-72 on all cards. Young of Atlantic City raised his mark to 16-2. Amoako of Silver Spring, Maryland via Accra, Ghana is now 21-14.

In the co-feature, Gabriel Pham scored his 2nd consecutive stoppage, as he took out Chauncey Fields at 1:29 of round four of their scheduled 6-round super middleweight bout.

With the win, Pham of Atlantic City improves to 8-1 with 4 knockouts. Fields of Lynchburg, Virginia falls to 4-2.

Heavyweight Brendan Barrett remained undefeated as he stopped Philly tough guy Brian Donahue at 2:33 of round two of their scheduled 4-round bout.

Barrett hurt Donahue on the ropes and stopped him after a hard flurry. Barrett is now 5-0-2 with all his wins coming via the stoppage variety. Donahue is now 3-14-3.

In another heavyweight tussle, Dan Pasciolla won a 6-round split decision over LeMarcus Tucker. It was a close fight with the each man having moments throughout the contest.

Adrian Wilson of Atlantic City got his first professional win by winning a 4-round unanimous decision over Henry Tyrone Paige, Wilson won on all cards 40-36 is now 1-3. Paige of Batesville, Arkansas is 0-4.

Thomas Romain of Brooklyn, New York won a 4-round unanimous decision over Sidell Blocker. Romain won all cards by 40-36 scores and is now 2-1. Blocker of Pleasantville, NJ is 1-7-1.

In a battle of pro debuters, Cesar Francis defeated Steve Moore by scores of 40-36 twice and 39-37.