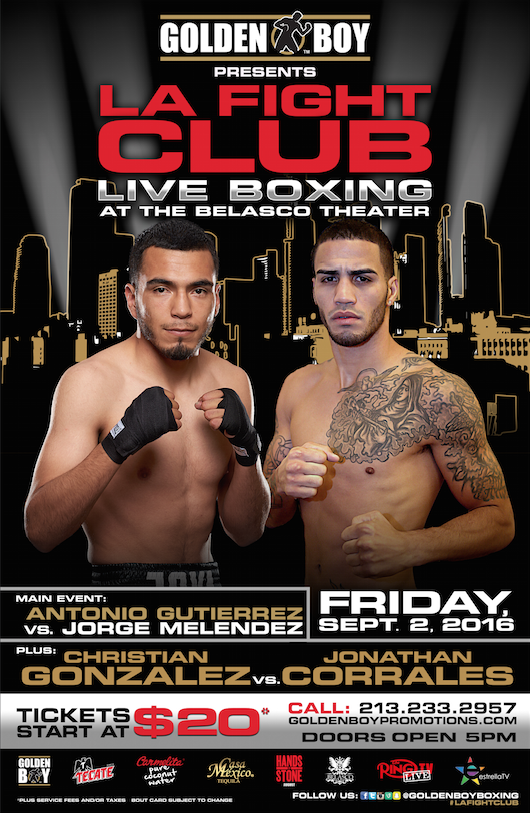 In the co-main event, Buena Park, California’s rising knockout artist Christian “Chimpa” Gonzalez (14-0, 12 KOs) will square off against Phoenix, Arizona’s Jonathan “Johnny” Corrales (8-3-2, 3 KOs) in an eight-round lightweight bout sure to bring a lot of action to the evening. Also, part of the undercard, and part of the RingTVLive.com stream beginning at 8:30 p.m. ET/5:30 p.m. PT, Lamont Roach Jr. (11-0, 3 KOs), of Washington D.C. will represent the East Coast in a schedule eight-round super featherweight fight against an opponent to be named shortly.

“Everyone loves a great Mexico vs. Puerto Rico rivalry, which is why pride will be on the line for this edition of LA FIGHT CLUB. Antonio Gutierrez is stepping back in the ring to defend Tijuana against Puerto Rican knockout artist Jorge Melendez for an all-out fiesta on September 2nd. We will also have one of boxing’s fastest rising stars, Christian “Chimpa” Gonzalez as the co-main event to show off his talents and knockout abilities to his rapidly growing fan base,” said Oscar De La Hoya, chairman and CEO of Golden Boy Promotions. “For all local fans looking to celebrate Mexican Independence pride this month, Golden Boy Promotions is offering Flex Passes starting at $20. Get your hands on a pass today because these will go fast!”

A true Tijuana fighter, Antonio “La Joya” Gutierrez’s relentless spirit has shown with his nearly perfect record, including a knockout over Mexican knockout artist Gilberto “Gil” Flores Hernandez. With 20 wins under his belt, Gutierrez can’t wait to get back into the ring and prove he has what it takes to move up to become a top contender in the middleweight division. Gutierrez was last in the ring taking on “King” Gabriel Rosado on the undercard of Fight of the Year candidate, Francisco Vargas vs. Orlando Salido. Although, result was not what the 22-year-old hoped for, but he won the hearts of the crowd that night and is now ready to get on the winners column as he headlines LA FIGHT CLUB on September 2.

A power puncher who delivers the knockouts Puerto Rican fight fans love, 27-year-old Jorge “Destroyer” Melendez has won several regional titles over the years. The fighter was last seen in the ring defeating Antonio Rodriguez in June 2015 via first round knockout and taking on Steve Martinez on December 2015. In his first fight of 2016, Melendez will be looking to start off with a victory when he faces his toughest opponent to date in Antonio Gutierrez on September 2.

Boxing’s next big thing, Buena Park’s Christian “Chimpa” Gonzalez won his first seven bouts in Mexico by first-round knockout. Since then, he has defeated tough competition by way of knockout, including seasoned fighters David Rodela, Alejandro Ochoa, and Luis Ruiz Lizarraga Jr. On Saturday, June 4, “Chimpa” will had his fans on edge as he went the distance for the second time in his career defeating John Gemino via unanimous decision.

A professional since 2011, Jonathan “Jhonny” Corrales is riding a six-fight winning streak since 2014. Corrales is a battle tested fight than has fought all of his fights in Mexico thus far, and will be looking to make an impression in his U.S. debut on September 2. He was last seen in an exciting fight against Abraham Montoya in June 2016, which resulted in a split decision draw. Set to face a hard puncher in Christian Gonzalez, Corrales knows that winning would put him on the map for a chance at a title.

A stellar amateur who won multiple amateur titles before turning professional in 2014, 20-year-old Roach has barely lost a round on his way up the 130-pound ladder. 2015 was a busy year for Roach Jr. as he took on and defeated Herbert “Sensational” Quartey, Jose Miguel Castro, Christian Santibanez and Jose “Flash” Bustos. The super featherweight doesn’t plan to slow down as 2016 has already proven to be a good year with a victory over Jesus Lule on the undercard of Luis Ortiz vs. Tony Thompson in March 2016 and an impressive unanimous decision victory Mexico’s Jose Arturo Esquivel on the non-televised undercard of Canelo vs. Khan at the T-Mobile Arena in Las Vegas.