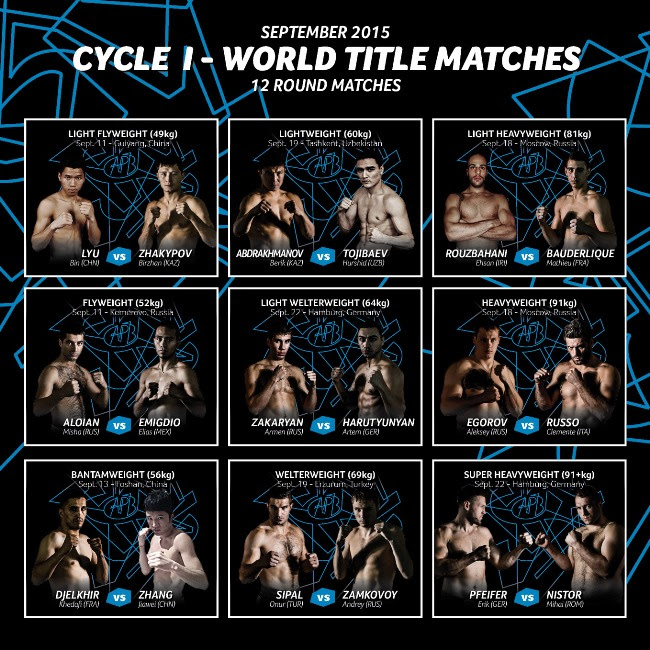 AIBA Pro Boxing (APB) World Championships are set for September following the wrap-up of the Cycle I Round 2 matches, Champions and Challengers will meet to contest the 12 round APB Championship matches.

“The entire sporting world is eagerly awaiting the APB World Championship matches which are set to produce the most spectacular boxing matches of this season. With world class talent in every weight class, fans have the opportunity to view excellent boxers compete for the APB World Title. AIBA Pro Boxing is the pinnacle of boxing, which provides a unique opportunity for pro boxers to qualify to the Rio 2016 Olympic Games” said AIBA President Dr Ching-Kuo Wu.

The defending Champions and Challengers, who will compete in APB World Championships will win a quota to the Rio 2016 Olympic Games. Consequently the respective National Olympic Committees will have to confirm the names of the qualified boxers to the International Boxing Association.

On September 22 in Hamburg, Germany, in a sold out venue, two titles will be up for grabs. The Super Heavyweight (91+ kg) Champion Erik Pfeifer (GER) will defend his title against multiple Romanian National Champion Mihai Nistor (ROM). The second title bout will see Artem Harutyunyan (GER) face Light Welterweight (64 kg) Champion Armen Zakaryan (RUS). In their previous fight Zakaryan was given his hardest match of the competition from the tough Harutyunyan, but battled the storm and established his ultimate dominance by winning APB World Title. The event will be broadcasted live by ProSieben Sat 1.

“I will do everything that it takes to ensure that I remain the reigning Champion in the 91+kg division. It will be a spectacular bout and I will go all out to keep my APB World belt”, said Erik Pfeifer.

His Challenger, a multiple Romanian National Champion Mihai Nistor said: “My philosophy is very simple – winners win and losers have excuses. I am definitely a winner and I know that the ring will define the true Champion of the 91+kg division in AIBA Pro Boxing. I hope the crowd will enjoy the show”.

China will root for the ‘Little Green Dragon’

APB returns to China for the key Bantamweight (56 kg) match when Jiawei Zhang (CHN) looks to give his home fans much to celebrate against the AIBA Pro Boxing Champion and Olympic silver medalist Khedafi Djelkhir (FRA) in Foshan on the 13th September.

Kicking off on September 11 an incredible Flyweight (52 kg) title bout is set for Russia where undefeated Champion Misha Aloian (RUS) faces a rematch against Elias Emigdio (MEX). In the previous fight Aloian was able to outbox the dangerous Emigdio and fans around the world are now eager to see if Emigdio will be able to force his style on the defending Champion in a sold out venue.

An expected 7000 fans will witness in Erzurum on 19 sept Welterweight (69 kg) Champion Onur Sipal’s (TUR) defense of his title as he will enjoy home advantage in Turkey against London 2012 Olympic Games bronze medalist Andrey Zamkovoy. The fight will be broadcasted by NTVspor in a sold out venue.

On the same day will be hosted , in a full capacity venue in Tashkent Uzbekistan a Lightweight (60 kg) title battle between Champion Berik Abdrakhmanov (RUS), and the in-form Hurshid Tojibaev (UZE), who will look to impress the home crowd.