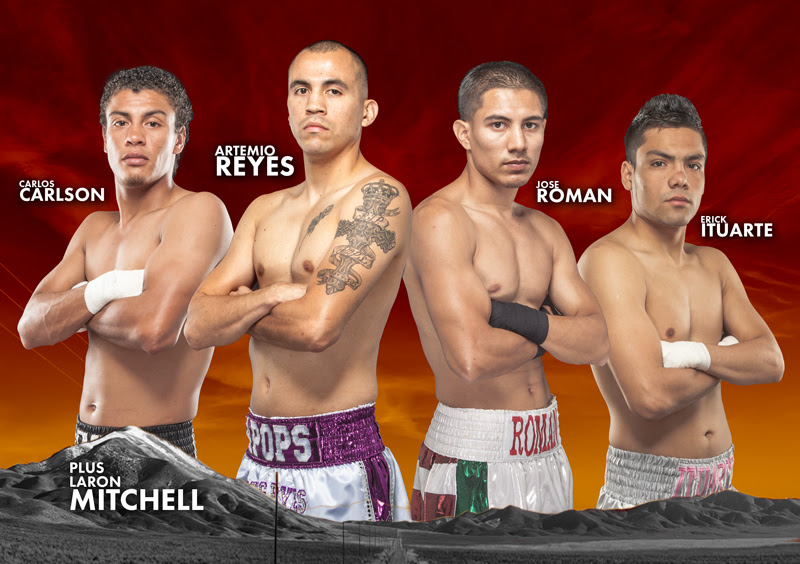 Thompson Boxing Promotions is saving its best for last. The tenth and final show of the year for the Southern California-based company features a who’s who of top-tier prospects. Highlighting the 8-round “Locked n’ Loaded” main event is welterweight heavy hitter Artemio Reyes (22-2, 18 KOs) of Riverside, Calif. Reyes puts his seven-fight win streak on the line against Christopher Degollado (10-3, 8 KOs) of Monterrey, Mex.

In the 8-round co-main event, lightweight sensation Jose Roman (18-1-1, 12 KOs) of Garden Grove, Calif. looks to close out the year with four solid wins against Jose Luis Ramirez (7-1-1, 4 KOs) of Tijuana, Mex.

Additionally, Carlos Carlson (15-0, 10 KOs), a rangy bantamweight with extreme power in his left hand, will test his burgeoning skills against an opponent to be named later (8-rounds).

“Our goal is always to put together an exciting event from top-to-bottom,” said Ken Thompson, president of Thompson Boxing Promotions. “This show appears to have extra sizzle because it’s loaded with some of our top performers. Because of that, it’s the best ticket in town.”

“We benefited greatly from how the schedule shook out,” said Alex Camponovo, matchmaker and general manager. “Reyes, Roman, and Carlson, if they take care of business this month, will set themselves up for bigger opportunities in 2015.”

The triumvirate of Reyes-Roman-Carlson represents a core group of prospects that have blossomed this year. Reyes is on an absolute tear, having notched six of his last seven wins by way of knockout. Roman faced adversity for the first time in his young career and was able to produce his first come-from-behind win by outpointing Luis Solis in May. Carlson kept his undefeated record in check and captured the vacant WBC Latino title earlier in the year.

“All three answered the bell this year,” Camponovo said. “Each flourished under different sets of challenging circumstances and that’s what you want to see.”