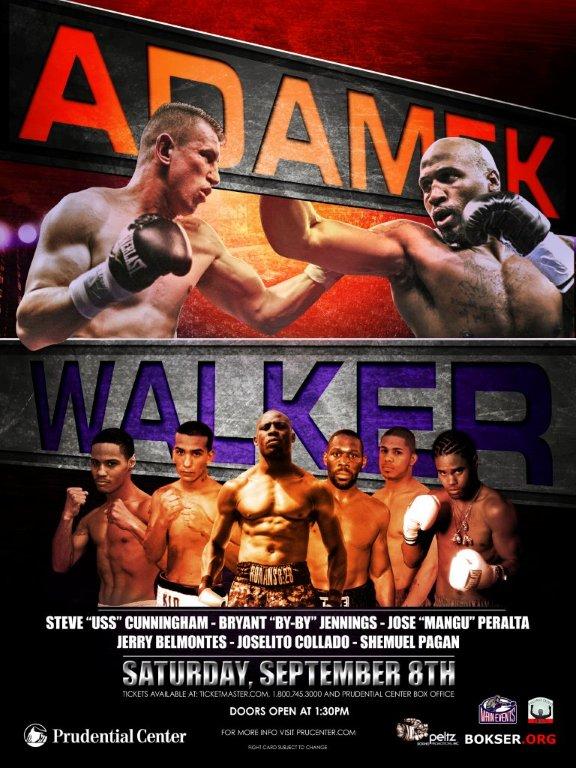 When Tomasz “Goral” Adamek returns to Newark’s Prudential Center on Saturday afternoon, September 8, 2012, the popular Polish Kearney resident will headline the “Ironbound Throwdown”, another big boxing card featuring a total of four world-rated contenders in three big heavyweight fights. In addition to appearances by heavyweights Bryant Jennings and Steve Cunningham, there’s also a handful of intriguing prospects on the undercard, including Jose Peralta, Karl Dargan, and a match between Jerry Belmontes and Joselito Collado. 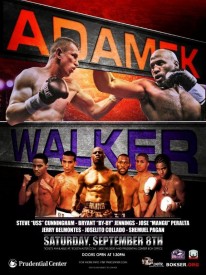 Highlighting the undercard is former two-time cruiserweight champion Steve “USS” Cunningham, 24-4, 12 KOs, who makes his heavyweight debut against Jason Gavern, of Harrisonburg, VA, 21-10-4, 10 KOs. Cunningham, of Philadelphia, currently rated #3 among cruiserweights, recently decided to make the move to the lucrative heavyweight division, looking for bigger challenges and the heavyweight paydays that come with them.

In his most recent bout, Cunningham failed to reclaim his 200-pound IBF championship when he dropped a 12-round decision to Yoan Pablo Hernandez in Germany. Cunningham is currently working to add weight to his perfectly conditioned frame without sacrificing speed or mobility, as he steps up for the first time to face the larger opposition in boxing’s glamour division.

In Jason “The Sensation” Gavern, Cunningham meets a fighter who holds wins over Darnell Wilson and Manuel Quezada, as well as a draw against Johnathon Banks. The always game Gavern is expected to provide the kind of test that will answer any questions about whether Cunningham can compete at his new weight.

In a special 8-round bout, high-rolling Philadelphia heavyweight prospect Bryant Jennings, 16-0, 6 KOs, takes on hard-punching Chris Koval of Youngstown, OH, 25-9, 18 KO’s. “Special K,” 30, will try to stop the impressive streak that “By By” Jennings has been riding since January. In his last three outings, Jennings has climbed into the top-ten rankings with victories over Maurice Byarm, Sergei Liakhovich, and Steve Collins. His win over Collins earned Jennings the USBA Heavyweight Title.

In a highly anticipated 8-round battle of junior lightweight prospects, “The Corpus Christi Kid,” undefeated Jerry Belmontes, 16-0, 5 KOs, meets Dominican-born Joselito Collado, 13-1, 3 KOs, of Jamaica, Queens, NY. A former amateur star, Belmontes will look to start making noise in the professional ranks with a victory over the highly touted Collado, who is coming off a March decision win over Juan Carlos Contreras in a bout that promises to be a war.

Two preliminary bouts round out the action-packed card: Jersey City’s Jose Peralta, 9-1, 5 KOs, is scheduled to appear in a 6-round junior welterweight fight against Christian Steele, of Philadelphia, 3-4, 1 KO’s and Philadelphia’s up and coming lightweight Karl Dargan puts his perfect 10-0, 5 KOs record on the line in a 6-round lightweight fight versus Cincinnati’s tough Jesse Carradine, 8-1-1, 4 KO’s.

Scheduled to begin at 2PM, this rare afternoon event brings some of the top names of the current professional boxing scene to Newark’s “Ironbound” neighborhood, which has become a hotbed for pro boxing in recent years. Topping the card is former two-time world champion, now rated #4 among heavyweights, Tomasz Adamek, 46-2, 28 KOs, who will face #12 rated Travis Walker of Tallahassee, FL, 39-7-1, 31 KO’s in a 12-round heavyweight battle for Adamek’s IBF North American Heavyweight Title. However the action on this card is not confined to the main event.