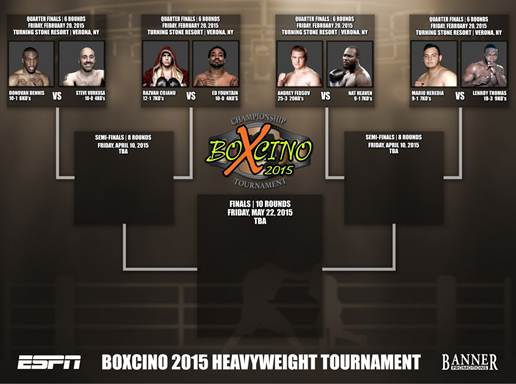 The February 20 edition of ESPN Friday Night Fights will feature the quarterfinals of the heavyweight portion of Boxcino 2015. Friday’s show, from Turning Stone Resort and Casino in Verona, N.Y., will air live at 9 p.m. ET on ESPN2, and is presented by Banner Promotions.

California’s Cojanu, who has won his last 12 fights, is coming off a first-round TKO win over Darius Shorter, while Missouri’s Fountain is looking to score another victory after a six-round unanimous decision win over Charles Ellis. Fedosov, also from California, defeated Maurice Harris in his last fight by second-round knockout, while Florida’s Heaven is looking to rebound from a first-round TKO loss to Stacy Frazier.

Massachusetts’ Vukosa is coming off a six-round unanimous decision win over Soloman Maye, while Iowa’s Dennis is looking to continue his winning ways following a six-round unanimous decision win over Terrel Woods. In his last outing, Florida’s Thomas scored a fourth-round TKO win over Jason Pauley, while Rhode Island’s Estrada, a 2004 U.S. Olympian, is looking to rebound from an eight-round majority decision loss to Vukosa.