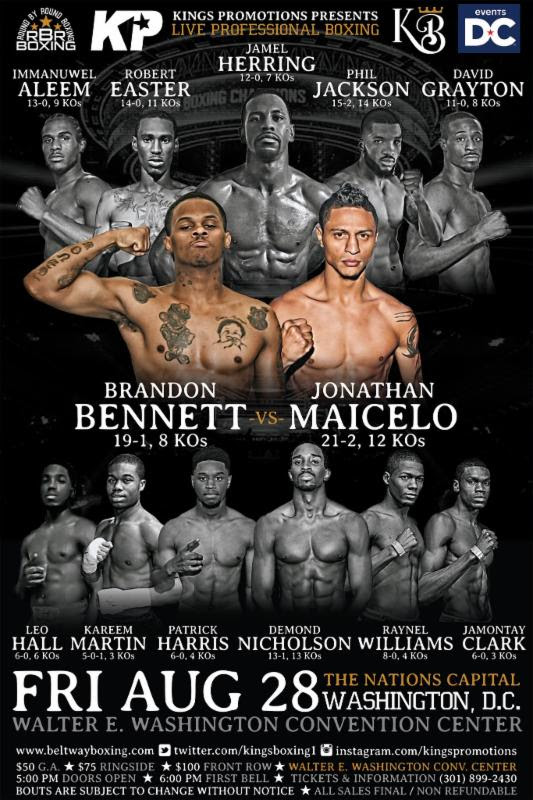 This Friday night, August 28 at the Walter E. Washington Convention Center in Washington, DC, King’s Promotions will present a night of boxing headlined by Brandon Bennett (19-1, 8 KO’s) squaring off with former title challenger Jonathan Maicelo (21-2, 12 KO’s) in a Lightweight bout scheduled for 10-rounds.

Bennett of Cincinnati, Ohio has been training hard for Maicelo.

“Training has been good. I been on weight for a few days. It’s been 2 hard months but the difficult part of training and dieting is over and I am ready to fight,” said Bennett.

When asked about Maicelo, Bennett was not concerned with his opponent, despite Maicelo having wins over Art Hovhannisyan and former world title challenger Fernando Angulo.

“He is an orthodox fighter. He likes to come in and he likes to counter punch. He may have fought for the title but I am the more experienced fighter. I have fought good guys and I get the best sparring. All of that doesn’t matter, because at the end of the day, we have to fight. ”

Bennett realizes that a win over Maicelo will push him very close to a fight for a world title and a win on Friday will give him another quality win to add to his resume.

“Hopefully in the next fight or two, I will be in position. Beating him should have me considered to be a top contender.”

If that is the case, Bennett will join gym mates and close friends, Adrien Broner and Rau’Shee Warren as the next fighter from trainer, Mike Stafford’s Cincinnati gym to fight for a world title. Bennett gets world class sparring and advice every day from Broner, a three-division world champion and Warren, a three-time U.S. Olympian and world title challenger.

The three have been inseparable for two decades

“I got into boxing at age eight. I was a football player. Rau’shee lived down the street from me and asked me to walk to the gym with him. He had already been boxing and Mike Stafford asked us to spar. He got the best of me that day but I stuck with it. Ironically, Adrien came in the next day and started boxing the very next day and Rau’shee sparred with him as well. Being around them is definitely an inspiration. I see what my friends have done and achieved and I know I will be next to have those accolades.”