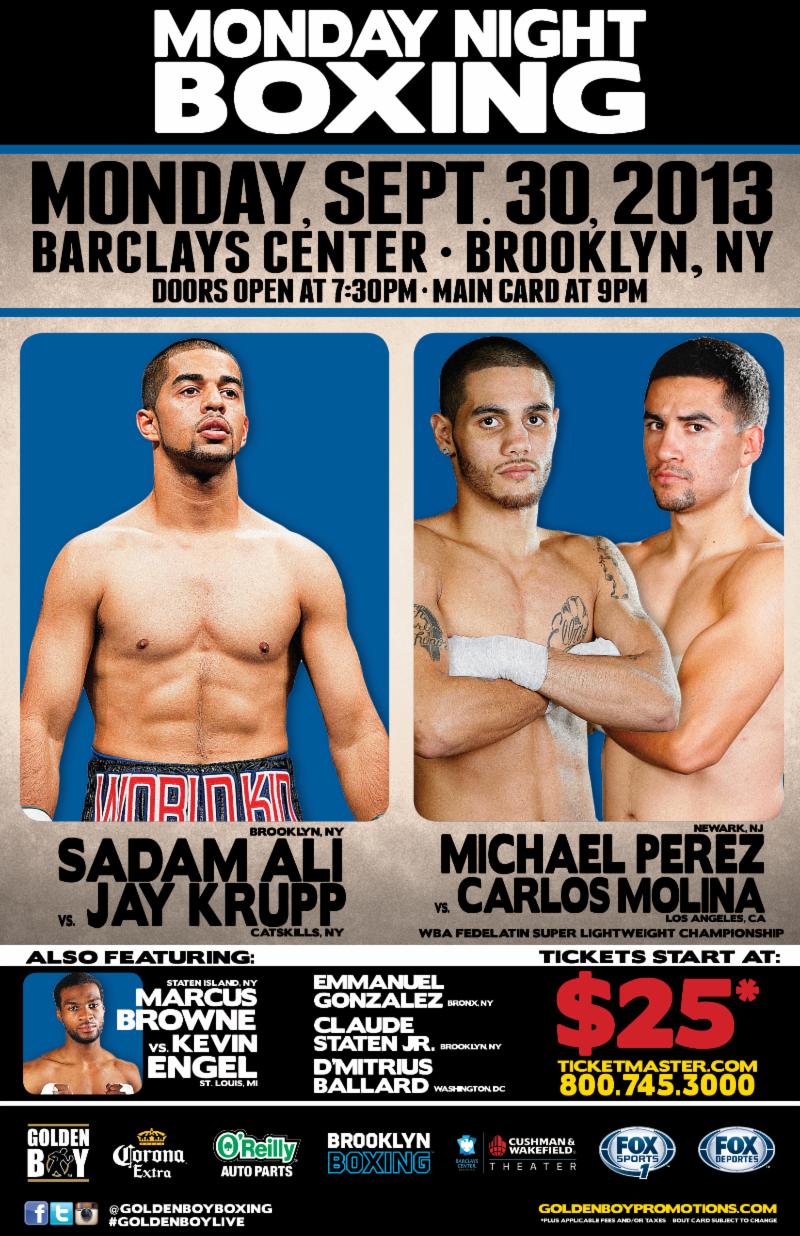 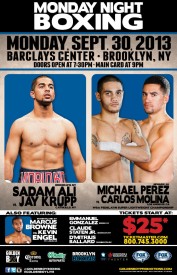 The event will also feature two exciting stars in the 140-pound division as Newark, New Jersey’s Michael “The Artist” Perez takes on a tough challenger in Carlos Molina for the WBA Fedelatin Super Lightweight Title, in the pivotal co-main event with the winner looking for championship gold next. Opening the televised portion of the card is a light heavyweight bout between Staten Island’s 2012 U.S. Olympian “Sir” Marcus Browne and St. Louis veteran Kevin “Hitman” Engel, as part of the Barclays Center Anniversary Celebration in Brooklyn.

In exciting undercard bouts, the Bronx’s Emmanuel Gonzalez, Brooklyn’s Claude Staten Jr. and Maryland’s D’Mitrius Ballard will all risk their unbeaten records against opponents to be announced.

“Brooklyn has become our second home, so it’s only fitting that we come back to help celebrate Barclays Center’s first anniversary with a stacked card,” said Oscar De La Hoya president of Golden Boy Promotions. “The recently signed Sadam Ali is a perfect headliner, as he is a Brooklyn native and unbeaten former Olympian. Plus we have Michael Perez vs. Carlos Molina in an explosive matchup between two fighters hungry for a big win.”

“As we head into year two, Barclays Center has established itself as the home for major boxing on the East Coast,” said Brett Yormark, CEO of Barclays Center. “We are looking forward to welcoming Brooklyn’s own Sadam Ali and are thrilled to team with Golden Boy Promotions for another great night of boxing at Barclays Center.”

“There’s no place like home,” said Brooklyn fighter Sadam Ali. “I’ve seen some great fights at Barclays Center and I have waited for my name to be called to fight here. Now that day has come and I couldn’t be more excited. This is going to be a performance and a win you won’t forget.”

“Sadam Ali’s a great talent with a bright future, but I’ve been waiting years for an opportunity like this and I can’t let it slide,” said Jay Krupp. “I’ve been a fighter my whole life and that’s what this is going to be on September 30, a fight.”

A decorated amateur boxer who was a Junior Olympic, PAL and Under-19 National Champion, as well as a two-time New York Golden Gloves Champion, 24-year-old

Sadam “World Kid” Ali (16-0, 10 KO’s) reached the pinnacle of the amateur game in 2008 when he represented the United States in the Beijing Games. In January of 2009, “World Kid”, who is of Yemen descent, turned professional with a first round technical knockout over Ricky Thompson. Ali has gone on to become a popular fighter in the New York and New Jersey area putting together win after win against increasingly tougher opposition. In his most recent fight on October 27, he knocked out Ronnie Warrior Jr. in the second round.

“Smokin” Jay Krupp (17-5, 8 KO’s) is a nine-year pro who gained notoriety for being trained by the man who brought Mike Tyson to prominence, Kevin Rooney. Winner of three straight fights, the 30-year-old Krupp most recently won a hard fought eight-round unanimous decision over Milton Ramos on June 21.

Newark’s Michael “The Artist” Perez (18-1-2, 10 KO’s) is a gritty 23-year-old fighter who will do whatever it takes to get the win. In 2010, Perez left his mark as a prospect to watch with his eight-round win over Jose Hernandez, a bout that was a definite “Fight of the Year” candidate. Since then, Perez is unbeaten in five of his last six bouts with the only loss to recently crowned World Champion Omar Figueroa Jr. and a technical draw with Lonnie Smith due to a cut from a clash of heads. Unbeaten in New York, Perez hopes to keep the streak going on September 30 in front of his local fans.

A product of the ultra-competitive Southern California boxing scene, where the battles in the gym are as intense as the ones on fight night, Carlos Molina (17-1-1, 7 KO’s) has emerged as a top prospect ready to take his game to the next level. Coming off of a tough 10-round meeting with former Unified World Champion Amir Khan last December, the 27-year-old Molina is eager to get back in the ring in his comfortable weight class of 135 pounds and show off the crisp counterpunching form that has led him to 17 victories thus far in his professional career.

Unbeaten as a professional, Staten Island’s “Sir” Marcus Browne (6-0, 6 KO’s) has made a seamless adjustment from the amateurs (where he represented the United States in the 2012 Olympics) to the pros. Fresh from a knockout victory over Robert Hill on the first Golden Boy Live! card on August 19, the 22-year-old will take a big step up against Engel on September 30. This will be Browne’s fourth time fighting in his adopted home at Barclays Center.

St. Louis’ Kevin “Hitman” Engel (20-8, 16 KO’s) is a hard-hitting veteran ready to push Browne to the limit. Having been in the ring with Anthony Dirrell, Thomas Williams Jr., Edwin Rodriguez and Dallas Vargas, the 33-year-old has the experience and power to make it a rough night for the highly-touted Browne in Brooklyn.

Tickets starting at $25 will go on sale Friday, August 30 at 10:00 a.m. ET. Tickets will be available for purchase at www.barclayscenter.com, www.ticketmaster.com, and at the American Express Box Office at Barclays Center beginning Tuesday, September 3 at noon.