Saul ‘Canelo’ Alvarez was sensationally defeated for only a second time as a professional in Las Vegas, as Dmitry Bivol successfully defended his WBA (Super) light heavyweight title with an assured unanimous decision win at the T-Mobile Arena.

Alvarez was looking to scale the 175 pound heights for a second time after a brief run as WBO champion in 2019, and although his opponent came in as a long serving ruler in the division, in a run stretching back to 2017, Canelo was expected to comfortably solve the puzzle presented to him, having only tasted defeat once before, to Floyd Mayweather, way back in 2013.

It was an upset win that few saw coming, but there were questions before the fight as to how the Mexican would deal with the technical style of Bivol, and of course the jump in weight. In front of a partisan pro-Mexico crowd, heightened due to the traditional Cinco de Mayo weekend, Canelo began with some body work, while Bivol studied his opponent, landing with a combination and reddening the favourites nose in an interesting opener.

After a technical second, Bivol opened up in the third, landing with a flush left hook at the end of a combination, and another three punch combo ended an impressive round for the Russian. More combination work saw Bivol largely dominate round four, but Canelo did reply with a strong finish to the frame, with a right hand troubling the champion, and an uppercut finding the mark. After another session where Bivol put his punches together with authority, Alvarez steadied the ship in the sixth, and the pair took turns to dish out the punishment in the seventh.

Canelo was coming on stronger than he had done before, and, after a clash of heads, he seemed to shade the eighth with good body work, and he whipped the crowd into a frenzy a round later, unloading a repertoire of shots as he turned the screw. Bivol though was unfazed, and he dealt with the championship rounds like a true champion.

Round ten saw Bivol make Alvarez miss on more than one occasion, while he landed with jabs and a big left hook, and, in the penultimate frame, more heavy combination punching from the 31-year-old seemingly put him in the driving seat going into the last round. It was a back and forth three minutes, but Canelo was unable to land the blows to take matters out of the judges’ hands as the contest went the distance.

With many expecting wild scorecards, all three judges scored the contest 115-113 to Bivol, in what was a stunning upset win.

Thoughts quickly turned to a rematch, which will leave a proposed trilogy fight with Gennady Golovkin in limbo.

“I proved to myself that I am the best” said Bivol to DAZN post-fight.

There is a rematch clause however, something Alvarez fully intends on cashing in.

“Of course I want the rematch, this doesn’t end here”, said a stunned loser.

On the undercard, Zhilei Zhang shook off the disappointment of seeing his IBF heavyweight title eliminator falling through, as he took under two minutes to knock out Scott Alexander, who was halted for the first time in his career.

Montana Love took the IBF North American super lightweight title, with a first round knockdown against Gabriel Gollaz Valenzuela proving crucial, as the American took a unanimous decision win by three scores of 114-112. 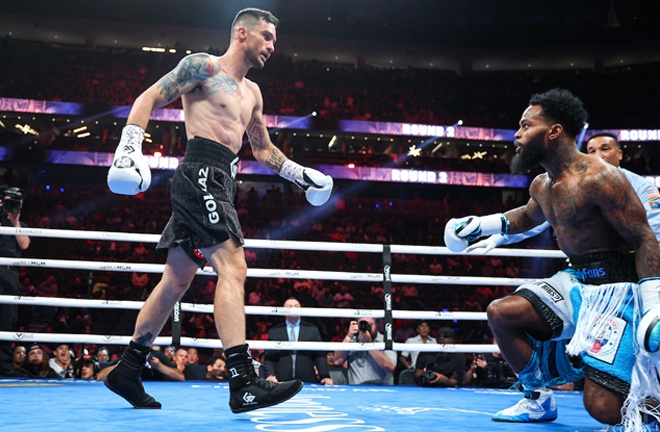 Shakhram Giyasov remained unbeaten, taking the vacant IBF North American strap at welterweight, dropping Christian Gomez three times on the way to a wide points win. Gomez was down in rounds four, seven and ten, and lost by two scores of 99-88, and a third at 99-89.

At flyweight, Joselito Velazquez stopped Jose Soto in six rounds, and at middleweight, Alexis Espino was halted in four by Aaron Silva.

Elnur Abduraimov notched a second round win against Manuel Correa at super featherweight, and at lightweight, Marc Castro had to go the six round distance to see off Pedro Vicente Scharbaai. Fernando Angel Molina took a six round split decision victory over Ricardo Valdovinos at super lightweight.