IBF 122-pound champion Carl Frampton weighed-in at 121.7 pounds and WBA titlist Scott Quigg measured 121.6 pounds in front of a decidedly pro-Frampton crowd at Manchester Arena on Friday for their long-awaited super bantamweight unification this Saturday, Feb. 27, live on SHO EXTREME at 5:30 p.m. ET/PT. Right here, we have the full Frampton vs. Quigg weigh-in results, along with some photos and quotes from the event proceeding tomorrow’s match.

Frampton vs. Quigg Tale of the Tape 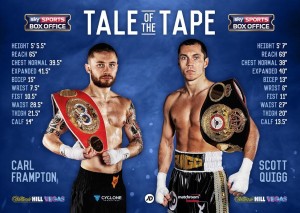 “I am better than him,” said Frampton (21-0, 14 KOs), of Belfast, Ireland, who blew a kiss to his rival before breaking away from the stare-down. “I have the power to knock him out, from the first round to the last round, and I’ve also got the boxing brain to comprehensively beat him on points.”

“I respect him as a fighter, but the best Carl Frampton can’t touch the best Scott Quigg,” said Quigg (32-0-2, 23 KOs), of Lancashire, United Kingdom.