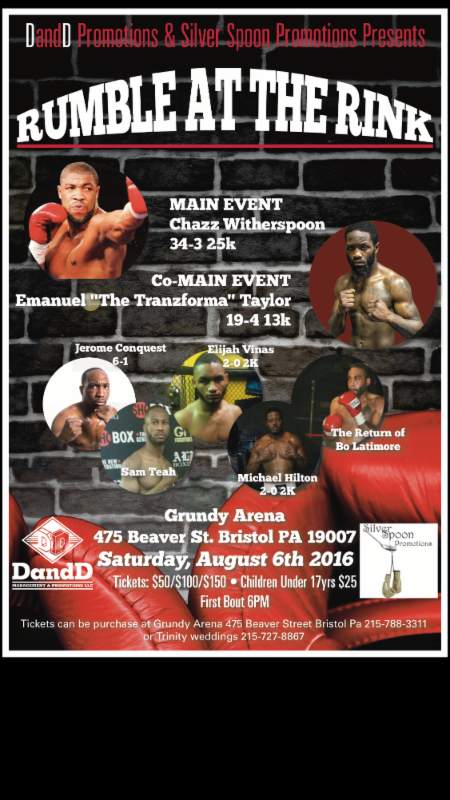 On Saturday night, August 6th, D & D Promotions and Silver Spoon Promotions will present “Rumble at the Rink II” at the Grundy Arena in Bristol, Pennsylvania. In the main event, heavyweight contender, Chazz “The Gentleman” Witherspoon will take part in a bout scheduled for eight rounds.

Witherspoon (33-4, 26 KO’s) of nearby Paulsboro, New Jersey established himself as one of the top American Heavyweights as the St. Joseph’s University graduate won his first twenty-three bouts with wins over the likes of Michael Alexander (11-0), Talmadge Griffis (24-6-3), Jonathan Haggler (18-1) before suffering his 1st defeat to future two-time world title challenger Chris Arreola via controversial disqualification.

Witherspoon went on to win three fights in a row, which was highlighted by an entertaining 8th round stoppage over Adam “The Swamp Donkey” Richards (21-1). That fight was voted Ring Magazine’s 2008 Heavyweight Fight of the Year.Witherspoon then dropped a fight to future two-time world title challenger Tony Thompson.

Witherspoon went on to score 4-consecutive knockouts which included a devastating 3rd-round destruction over Tyson Cobb (14-2). Witherspoon then took on undefeated prospect Seth Mitchell on April 28, 2012 in a bout where Witherspoon had Mitchell badly hurt in several occasions before Mitchell came away with the victory.

Witherspoon has scored four consecutive knockouts which includes his last bout when he stopped Nick Guivas (11-2-2) in three rounds on August 15th in Atlantic City.