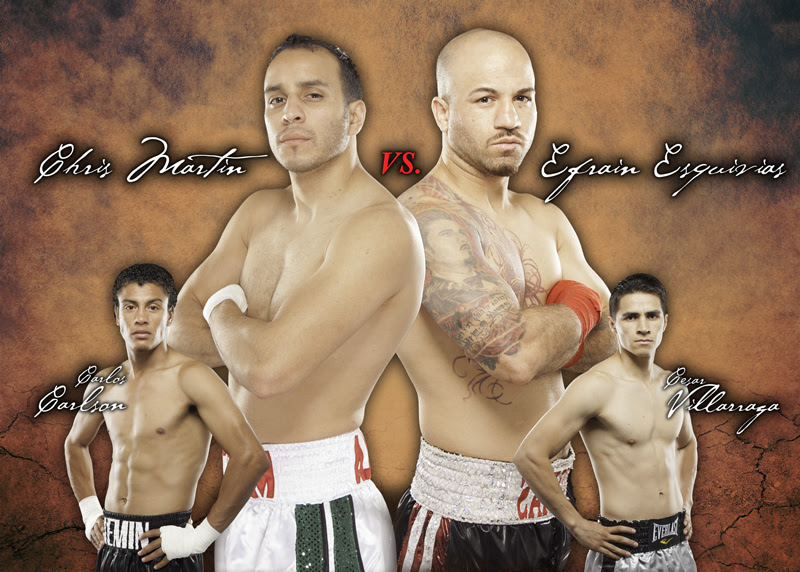 Super bantamweights Christopher Martin (27-3-3, 9 KOs), and Efrain Esquivias (17-3-1, 10 KOs), both coming off rare defeats, will look to steer their respective careers in the right direction when they meet in the 10-round main event at Thompson Boxing Promotions’ “Locked n’ Loaded” event Friday, July 25, from the Doubletree Hotel in Ontario, Calif.

Esquivias, out of Carson, Calif., has redemption on his mind after dropping a majority decision to Ruben Tamayo in April in a fight that was contested at a catch weight of 138 lbs., several weight classes north of where Esquivias typically fights. On the other hand, the San Diego-based Martin could not outpoint Enrique Quevedo in October, which ended his five-fight win streak.

“Not only is this match up competitive and exciting on various levels, but it adds a level of intrigue more commonly found in title fights,” said Ken Thompson, president of Thompson Boxing. “They each have a chance to hit the reset button with a commanding win.”

“Both fighters are at a crossroads in that they are coming off defeats that no one predicted,” said Alex Camponovo, general manager and matchmaker for Thompson Boxing. “Martin should be continuing his win streak rather than trying to start a new one. Esquivias had a bad night in his last outing and failed to capitalize on the Rafael Marquez knockout win in September. To say that everything is on the line for these two boxers would be an understatement.”

“You hate to lose a fight because it always stays with you no matter how hard you try to forget it,” said Martin, who’s Twitter handle is @Marvelous_CM. “I’m always motivated to fight, but this time, I have a little extra pushing me to make up for what happened last time.”

“I think the fans are going to see a brand new version of me on July 25,” said Esquivias, who can be followed on Twitter @EfrainBoxing. “It’s a game changer for me. I need to step up to the challenge and perform well. I’ve prepared, trained hard, and I’m ready to put on a great fight.”

The co-main event features undefeated bantamweight prospect Carlos Carlson (14-0, 10 KOs) of Mexico in the first defense of his WBC Latino Championship that he won versus the always-tough Javier Gallo in February. Carlson faces fellow countryman Jose Cen-Torres (13-4, 1 KO) in the 8-round championship fight.

Carlson, while popular in his hometown of Tijuana, is somewhat new to the Southern California fight scene. His fight with Gallo, who is a well-respected bantamweight veteran, was a back-and-forth battle that introduced boxing fans to a special talent in the 118-pound division. Carlson made plenty of new fans with his unanimous decision win over the popular Gallo.

By winning a vacant regional title, Carlson now has a target on his back that will only grow larger with every successful defense.

“I know Cen-Torres to be a good, quality fighter,” said Carlson, promoted by Thompson Boxing. “He has a solid chin, doesn’t back down, and always comes ready to fight. It’s a tough fight, but I see myself winning.”

Preceding the title fight is undefeated light welterweight prospect Jonathan Garcia (14-0, 11 KOs) of Watsonville, Calif. fighting against an opponent to be named later. The bout is scheduled for 8-rounds.

Also on the card, flyweight prospects Javier Lapizco (4-0, 1 KO) of Mexico and Christian Lorenzo (2-1, 1 KO) of Los Angeles battle in a 4-round fight.