Claressa Shields fell short in delivering the knockout she had promised but it did not matter as her wide points win over overmatched Ivana Habazin was just as emphatic to become a three-weight world champion.

The only American to win back-to-back Olympic gold medals in boxing, made history yet again by becoming the fastest to win three championships in as many weight classes in only ten fights.

Shields routed Habazin over ten dominant rounds by scores of 100-89, 100-90 and 99-89 on Friday in Atlantic City to become the unified Light Middleweight titlist.

It was clear early in the fight that Habazin lacked the ring IQ and skillset to make the fight competitive. 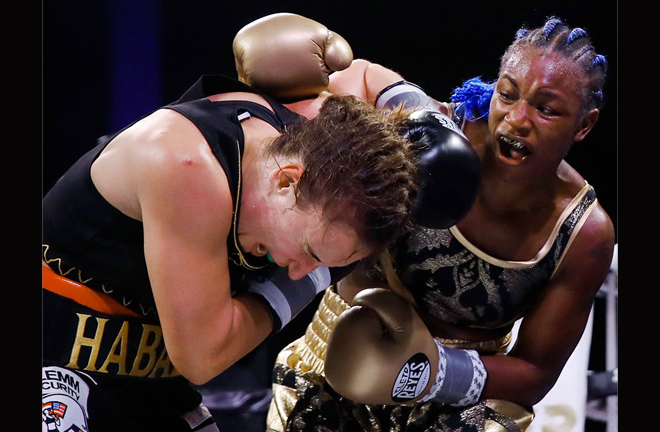 Shields (10-0, 2 KOs) really worked the body throughout the fight, which accounted for nearly half of all the punches she landed (68 of 141). She also limited her opponent who only managed a paltry 49 out of 285 shots thrown.

The Flint native also recorded her first knockdown as a pro when she dropped Habazin (20-4, 7 KOs) with a hard body shot in the sixth round. It was the first time that the Croatian fighter had been knocked down.

The outcome was never in doubt from the very beginning with Shields sweeping the first nine rounds and landing power shots at will. Habazin never landed anything significant and never appeared threatening, as she was comprehensively outclassed.

It’s hard to believe that Shields won her first title at 168 pounds when she was 24 and then went on to defeat Christina Hammer last April to unify the 160-pound division. Last night’s win added the vacant WBO and WBC 154-pound titles to her impressive hardware.

The victory over Habizin was also especially gratifying because the fight was postponed twice and things eventually got personal as the boxers traded verbal insults in the media.

“I think Ivana can take a piece of humble pie and go back to Croatia and hopefully on her next try she’ll become a world champion against somebody else,” Shields said.

Love her or hate her, the self-described GWOAT is a generational talent whose singular accomplishments have resurrected women’s boxing and brought the entire sport back into the mainstream.