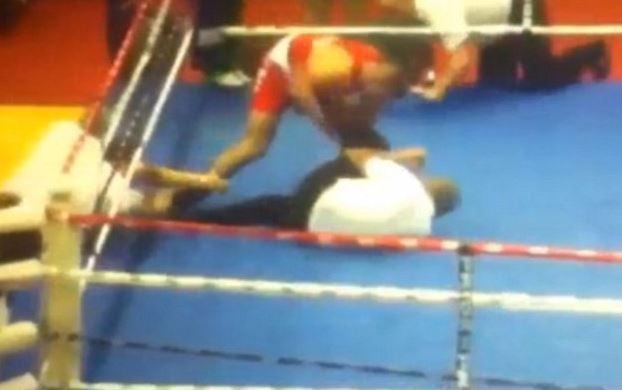 The International Boxing Association (AIBA) Executive Committee Bureau has provisionally suspended Croatian boxer Vido Loncar for life from involvement in boxing, as well as his coaches who were ringside in the 81kg category contest between Loncar and Lithuanian Baniulis Algirdas at the EUBC European Youth Boxing Championships in Zagreb, Croatia.

[Editor’s Note: You can watch the video of Vido Loncar punching the referee at the top of this page. The assault begins at about 1:15 into the video.]

The official report of the incident, compiled by AIBA Supervisor Mr Maxim Certicovtev (Moldova), concluded that Loncar punched the referee, Mr Maciej Dziurgot, who subsequently fell to the floor where the boxer continued to punch him. The AIBA 3-star Polish referee was taken to hospital by ambulance and local police arrested the Croatian boxer.

AIBA President Dr Ching-Kuo Wu said: “AIBA and the entire boxing family have zero tolerance for this sort of behavior.”

The AIBA President immediately sent a letter to the Polish Boxing Association following the incident in which he said he had learned that the boxer had allegedly been encouraged by his local club coach to hit the referee, and this made him consider better education and development for coaches to become key role models for the younger generation.

This letter continues: “As a President of AIBA, I truly feel sorry for Mr Dziurgot and his family concerning the incident. I would like to send you my strongest commitments to apply all possible measurements to punish and remove all individuals who brought AIBA and our sport down, as well as to prevent this type of incident from taking place in our competitions ever again.”