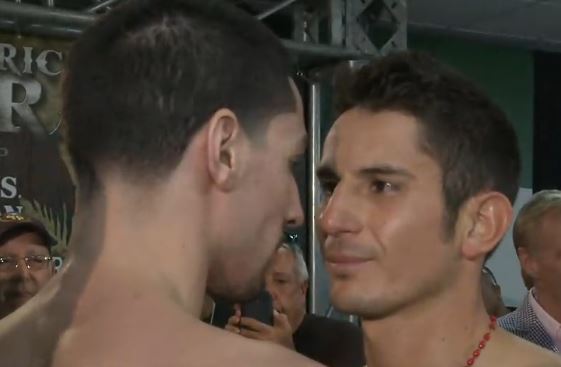 Right here, you can find the complete Garcia vs. Herrera weigh-in results, and a series of photos and notes from the proceedings. Take a look.

Things got a bit heated between these two fighters and their camps at the weigh-in. There was an intense stare down, and then Garcia started talking some trash with Herrera simply smiling and shaking his head no. Eventually they were separated as the crowd went crazy. Both guys are in shape and on weight, but Garcia is noticeably larger and more muscular.

Scott wore a paper bag over his head at the weigh-ins, with the text “Get ya popcorn ready”, a nod to Terrell Owens. Wilder and Scott have sparred, so they know each other, and Scott also measures up to Wilder physically, which provides a different twist than what we’re used to. But will he be able to stand up to Wilder’s power, especially after we’ve seen him hurt by Dereck Chisora?

Thanks for checking out our coverage of the JuanMa Lopez vs. Ponce de Leon, Wilder vs. Scott, and Garcia vs. Herrera weigh-in results. Be sure to follow up with ProBoxing-Fans.com later in the weekend for full post-fight analysis and aftermath.