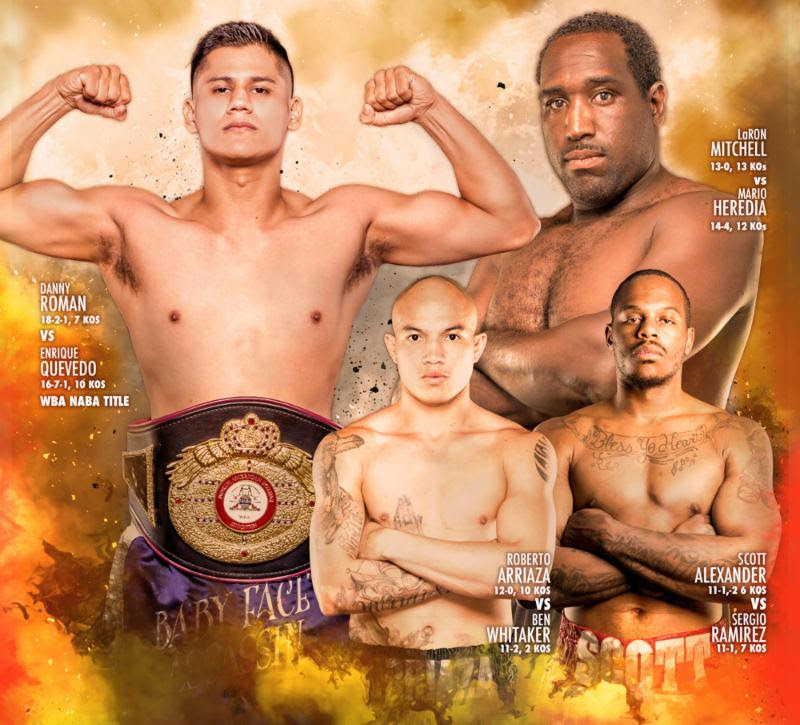 Roman, 26, currently sits at number eight on the WBA rankings. Roman first appeared on the WBA list last year and has been steadily climbing the ladder with each successful title defense.

With eleven wins since 2014, Roman is among the more active contenders in the division. He largely outboxes his competition – a testament to his superior technical ability – so it comes as a slight surprise that his last two victories have come in knockout fashion.

“I’m always trying to improve and get better with every fight,” Roman said. “Quevedo presents another challenge for me. I see him as someone that is in my way for what I want to accomplish. I’ll be more than ready to defend my title.”

Mitchell, who lives and trains in San Francisco, has already won three times this year. His latest knockout win came against rugged veteran Epifanio Mendoza. In the third round, Mitchell strung a couple of combinations together and connected with a left hook to the body. Mendoza crumbled to the floor and was counted out at the :52 mark.

“I’m not the type that is careless and wild in the ring,” said the 36-year-old Mitchell. “In the heavyweight division, any fight could be your last. I’m extremely careful about not chasing knockouts. I just let the fight develop and the knockouts take care of themselves.”

On the undercard, welterweight prospect Robert Arriaza (12-0, 10 KOs) of Los Angeles by way of Nicaragua meets Benjamin Whitaker (11-2, 2 KOs) of San Antonio, Tex. in an eight round fight.