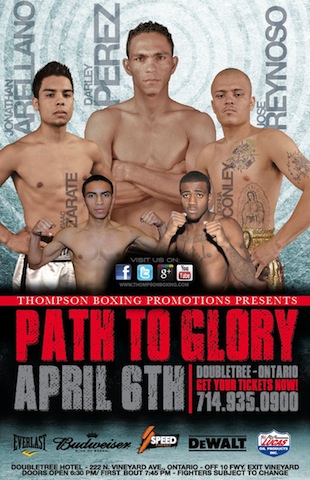 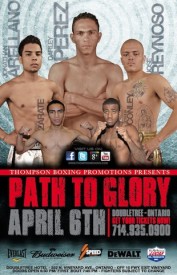 Perez, 28, had a three fight knockout streak going until sturdy rock-chinned Fernando Trejo forced a distance fight. That’s not unusual. Still, Perez had stopped Oscar Meza, Baudel Cardenas and Wilson Alcorro in their tracks. The Colombian has speed and power and is eager to display them to the always knowledgeable fight crowd at the Doubletree Hotel.

Hernandez, 33, looks to snap a two-fight losing streak when he meets Perez in the ring. His last loss was a five round outing against undefeated former lightweight world champion Paul Spadafora. That’s not a bad showing and he looks to begin a winning streak against a rising contender.

In the co-main event Riverside’s Jose “El Niño” Reynoso (15-2-1, 2 KOs) steps back in the ring after a short injury time out and fights James Hope (6-9-1, 4 KOs) of South Carolina in an 8-round junior welterweight clash.

Reynoso, 27, a slick southpaw boxer out of the Capital Punishment Gym, has not suffered a defeat in nearly three years. The Riverside native has never been defeated in California and all of his wins in the last eight years were against opponents with solid, winning records. Reynoso’s most impressive win came against fellow Riverside prizefighter Hector Serrano.

Hope, 28, may not have a sterling record but when you look at his past fights he has fought some of the best junior welterweight prospects in the country including Frankie Gomez, Jose Benavidez, Chris Algieri and Jake Giuriceo to name a few. The South Carolina fighter will give anyone he fights a difficult time. He fought undefeated Bayan Jargal to a draw in 2010.

A super bantamweight showdown features undefeated Jonathan “Lil Thunder” Arellano (11-0-1) facing Calexico’s hard-hitting Jose Angel Cota (8-6, 6 KOs) in an eight round bout. Ontario’s Arellano has a mix of speed and movement that confuses opponents who have all failed to adjust.

Cota is a rough and tough junior featherweight originally out of Mexicali. He recently gave Walter Sarnoi all he can handle and always looks for the knockout. He’ll be gunning for Arellano.

Other fights on the card include a welterweight clash between San Bernardino’s Joshua Conley (1-0) and L.A.’s Eduardo Herrera (0-4); and other fights showcasing Marcos Brenes, Edgar Flores and debuting twin brother pugilists Carlos Chavez and Alex Chavez.