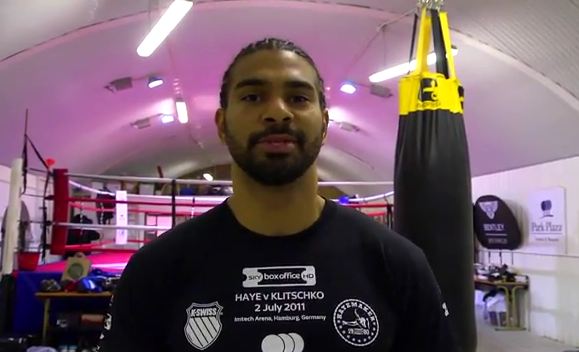 The Wladimir Klitschko vs. David Haye bout is less than a month away. Both men have been working hard in training camp, and even though the opening press conferences have long since passed, the trash talking hasn’t subsided. In this video posted online, David Haye continues talking the talk as he takes a break from his training to break down his upcoming match against Klitschko, which on the date of the video, was exactly four weeks away from taking place.

Haye says that he is going to destroy Wladimir, and that no matter what he brings to the table, he’s going to knock him out, and he’s going to do it in front of his fans. He cites his power, speed and skill as the keys to victory, and he’s ready to get in the ring and lay it all on the line. Enjoy this short David Haye video clip and see if he’ll be able to back up all of that trash talking come fight night in July.