WBA super featherweight champion Gervonta Davis (22-0, 21 KOs) did as many expected by stopping Ricardo Nunez (21-3, 19 KOs) in the second round Saturday night on Showtime World Championship Boxing at the Royal Farms Arena, in Baltimore, Maryland.

Fighting for the first time in front of a sellout crowd of 14,686 within his hometown in six years, Davis simply had too much for mandatory challenger Nunez. The fighters patiently sized each other up in the opening round with the hard-hitting Nunez coming forward and attempting to cut off the ring. However, Davis struck first with a left hand that snapped Nunez’s head back. For much of the opening stanza, Davis peppered Nunez with body shots.

Davis caught Nunez with a left hand out of a break that staggered the Panamanian in the second. Moments later, he unleashed a vicious left hook which caught Nunez flush rocking his head back against the ropes. Davis barely missed with a follow-up right, but the damage had already been done as Nunez appeared unsteady on his feet and was trying to tie his opponent up.

Referee Harvey Dock had seen enough and moved in to stop the developing route with 1:27 remaining in the round.

“I saw him get hit by a couple of shots and I decided to stop it,” Dock said. “I think he was defenseless at that time, at the point, and he was.”

Davis reflected on the two recent ring deaths of Maxim Dadashev and Hugo Alfredo Santillan following the stoppage in his post-fight remarks.

“Thank God. Condolences to the two fighters who died this week, but tonight we showed out,” Davis said. Mandatory now out of the way, the southpaw Davis can turn his attention to fellow belt-holders Garry Russell Jr and Tevin Farmer. Davis focused on Farmer, who outpointed Guillaume Frenois on Saturday to retain the IBF strap.

“That’s a fight that can be made,” Davis said. “Let’s get it on later this year.”

Farmer has been one of boxing’s most active fighters. Since defeating Billy Dib to win the title last August, the 28-year old Farmer has now made four defenses.

‘Tank’ Davis’ promotor Floyd Mayweather Jr. revealed after the fight that the plan was to pit his protégé against Farmer in three to four months in a pay-per-view unification showdown.

However, there is some doubt whether the Davis-Farmer fight can be made next, so Mayweather Promotions is also considering a bout with former WBA featherweight champion Yuriorkis Gamboa (30-2, 18 KOs).

Gamboa looked impressive Saturday night in battering and then dropping Roman Martinez twice in the second round, knocking him out on the second knockdown.

But at age 37, the faded veteran is beyond his prime and we simply don’t know how competitive that fight would be.

Davis is a generational talent but he’s never going to be able to claim pound-for-pound supremacy by beating the likes of Nunez, Cuellar, Fonseca and Ruiz.

Although Gervonta has captured two world titles at super featherweight, he hasn’t fought any of these more talented fighters in the division.

We’ll see if his handlers are willing to take some risks with their investment.

Jr. Welterweight Malik Hawkins (16-0, 9 KOs) won his fourth division in a row, a tough one over Jonathan Steele (9-5-1, 6 KOs) of Duncanville, Texas. Steele took some big shots but dug deep, going to the body often in hopes to pull off the upset which was not to be. Judges favored the longer and rangier Hawkins, who landed more and was able to control most of the action with his reach.

Jr. bantamweight Dylan Price (9-0, 6 KOs) was extended eight rounds for the first time in his career in beating Samuel Gutierrez (16-24-6, 6 KOs) by decision. Price was fast and sharp throughout the fight and simply outworked his Mexican rival over much of the fight. Final score cards read 78-74 and 79-73 twice. 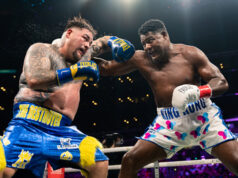 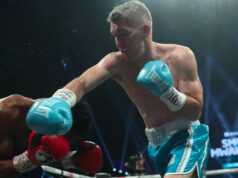