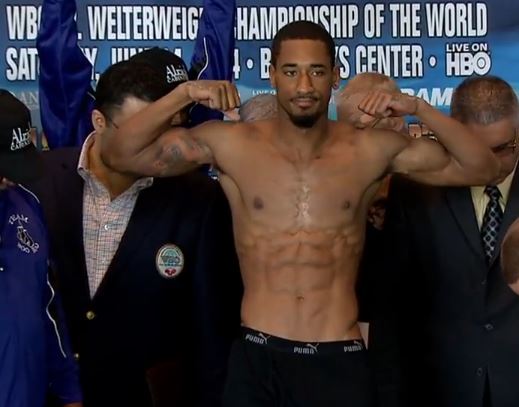 An outstanding super welterweight clash has been added to Showtime on Saturday, June 11 as undefeated Demetrius Andrade will face hard-hitting contender Willie Nelson in a WBC Super Welterweight Title Eliminator. The winner of the 12-round co-feature will become the mandatory challenger to the winner of the May 21 showdown between Jermell Charlo and John Jackson, who face off for the vacant title.

Andrade vs. Nelson will serve as the chief support to the all-action matchup between Ruslan Provodnikov and John Molina Jr. from Turning Stone Casino in Verona, New York.  In the opening bout of the tripleheader during International Boxing Hall of Fame weekend, Dejan Zlaticanin will take on Emiliano Marsili for the vacant WBC Lightweight title.

Fighting out of his native Providence, R.I., the 28-year-old Andrade has compiled an unblemished record of 22-0 with 15 knockouts since turning professional in 2008 after representing the United States in the 2008 Olympics in Beijing, China.

A crafty southpaw with a piston-like jab and knockout power in each hand, Andrade won the vacant WBO Junior Middleweight World Championship with a career-best performance over Vanes Martirosyan on November 9, 2013 and successfully defended the title against No. 1-ranked mandatory challenger Brian Rose on June 14, 2014. Most recently Andrade, who is a consensus top-5 super welterweight, scored a second-round knockout over Dario Fabian Pucheta on October 17, 2015.

A true road warrior who is extremely tall for a junior middleweight at 6-foot-3, Nelson (25-2-1, 15 KO’s) has faced and defeated numerous top contenders over his 10-year career. Fighting only once in 2015, the Cleveland native upset highly regarded and undefeated junior middleweight prospect Tony Harrison with a ninth-round knockout on July 11 in Tampa, Florida. In his first start of 2016, Nelson stopped Jonathan Batista in the second round on March 25.

Other notable names the all-action Nelson has defeated include John Jackson, Luciano Cuello, Michael Medina and Yudel Jackson. On October 14, 2014, Nelson came up just short against Martirosyan, losing a hotly contested 10-round decision on SHOWTIME.

The southpaw Zlaticanin (17-0, 10 KOs) was an accomplished amateur in Eastern Europe before making a statement in his U.S. debut with an impressive fourth-round TKO of previously undefeated Ivan Redkach in a 135-pound title eliminator last June 13 on SHOWTIME.

The 31-year-old Zlaticanin is an offensive-minded fighter who constantly pressures his opponents, outworks them and wears them down. Zlaticanin, of the Southeastern European country of Montenegro, will be making his first start in nearly 12 months.

The win over Redkach last June earned Redkach the WBC’s mandatory position at 135 pounds. He was scheduled to face WBC Champion Jorge Linares in early 2016, but Linares pulled out of the bout with a broken hand. Due to the injury, the WBC has since named Linares their champion in recess, creating the opportunity for the vacant title shot.

The Italian Marsili (32-0-1, 14 KOs) will make his 2016, U.S. and SHOWTIME debut. The undefeated southpaw has fought all but one of his professional fights in Italy, the lone exception a 2012 TKO of veteran contender Derry Matthews in Britain.

The 39-year old fought twice in 2015, a seventh-round TKO of Gyorgy Mizsei Jr., for the European lightweight belt and a 12-round unanimous decision over Gamaliel Diaz for the WBC’s 135-pound silver title.