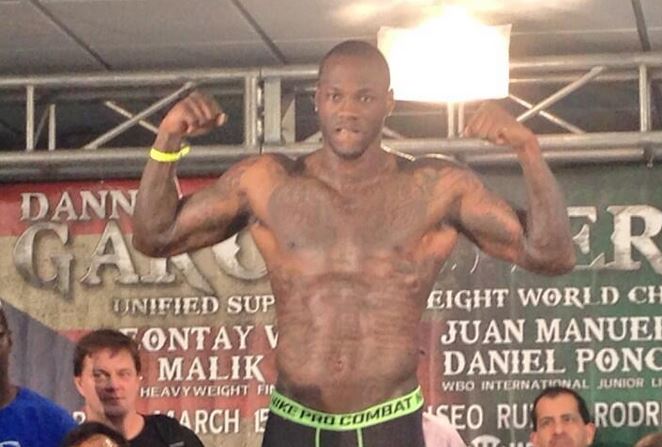 KDeontay Wilder would love to face off against the winner of this summer’s British heavyweight clash, either Tyson Fury or Dereck Chisora, but must first come through his toughest challenge to date, against Malik Scott this Saturday night in Bayamon, Puerto Rico.

The 28-year-old Wilder has amassed a chilling knockout record having dispensed of all of his 30 opponents by brutal stoppage.

Some have questioned the level of competition so far for the man being touted as the next great American heavyweight, but against Scott he goes in against an opponent who has only lost once, that coming somewhat controversially against Chisora last year.

An emphatic victory over the skilled 33-year-old Scott would go a long way to silencing those critics and get tongues wagging as Wilder looks to take over Wladimir Klitschko’s iron throne.

Additionally, the winner is in line to face the winner of the Chris Areola and Bermane Stiverne for the WBC heavyweight world title, which was recently left vacant following the retirement of Vitali Klitschko. It is this incentive that is spurring on Wilder to be as ruthless as ever when he steps into the ring this weekend.

“I have already won a lot of fans over that wasn’t with me in the beginning. A lot of them, they take different fights to crack than others but I think this fight right here is going to crack a lot of people. It’s going to bring a lot of fans onboard once I do what I’ve got to do and that’s win.

“Everybody around the world is waiting for this fight, even a lot of former champions are waiting on this fight saying this is the most exciting heavyweight bout this year and they’re looking forward to it.

“Whoever wins this fight goes on to fight for the title.

“It’s something that I’ve been waiting for all of my career and Malik has been in this game longer than I have so I’m sure he’s been expecting the same thing.

“I have thought about it over and over again, and when it comes to Malik, being that we’re such great friends – it’s going to seem kind of harsh or kind of bad for me to say this – but I want to seriously hurt him without hurting him as far as keeping my knockout ratio going.

“As far as showing people that even when I’m with a serious contender that the same results can happen and because I’m going in there and I’m not going to hold nothing back. That’s just not in my nature, that’s never been in me.”

Should Wilder prevail in his eventual quest for world title glory a potential superfight with either Tyson Fury or Dereck Chisora could be set up.

Both men are expected to face each other this summer in an eliminator for the WBO heavyweight world title and the Alabama native would be up to renew Anglo-American hostilities in a possible unification showdown.

“That would be excellent but not only for me but for the winner of the other belts as well too and both of us meeting to unify both belts.

“It would be fresh faces in the top of the division – so that would be great. Wlad [Klitschko] has been down for a long time and a lot of people like to see the rotation of fresh faces and I think that will be a great move if they [Chisora or Fury] can win it and I go on to win it and we fight for the belts.

“That would be cool but this is the heavyweight division and even though some things make sense and sound good, sometimes they get detours. But I would love that fight and would love to come to the UK and make it happen.”