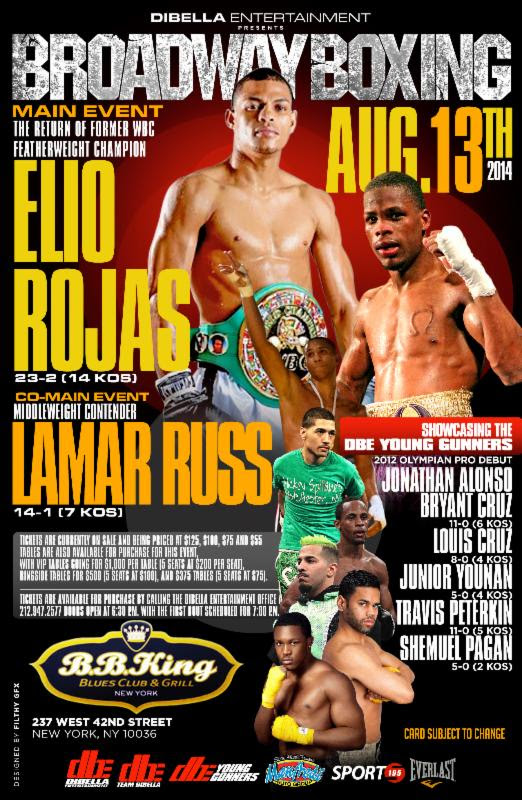 Lou DiBella has announced two more high profile signings to his roster and the fighters will both be featured on DBE’s upcoming Broadway Boxing card on Wednesday, August 13, at NYC’s B.B. King Blues Club and Gril.

Headlining the card will be talented Elio Rojas (23-2, 14KO’s) returning to the ring for the first time in nearly two and a half years. The first obstacle on the road toward another world championship opportunity will be opponent Robert Osiobe (14-9-4, 6KO’s). Rojas will now be campaigning in the junior lightweight division, though his feature eight-round bout will be held just above the 130lb. limit. 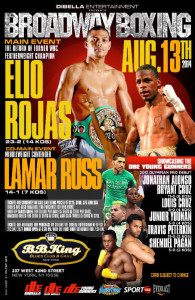 Jonathan Alonso, a former amateur standout and 2012 Olympian for Spain, will be looking to impress in his US and pro debut when he sees action in a special attraction four-round middleweight bout.

“Elio Rojas is not only a former world champion but a tremendous offensive fighter, who will immediately be a player in the 130lb. division. After just a few fights, Elio would love a showdown with a 130lb. champion or his dream bout against Yuriorkis Gamboa,” said DiBella.

Regarding Alonso, DiBella stated, “We are pleased to have inked a deal with Jonathan Alonso, an Olympian and one of the best amateur fighters to come out of Spain in recent decades.”

“I couldn’t be more excited and grateful to have signed with DiBella Entertainment and my manager Joe Duva and to finally get my career back underway,” said Rojas. “Now living in New York, it has always been a dream of mine to fight here, in front of my fans, and now I will have the opportunity on August 13. I want to fight the best that my division has to offer and I feel that I will be ready to take on any of the top fighters that are willing to accept the challenge and ultimately win back a world championship.”

“Ever since I first started boxing, it has been a dream of mine to make my professional debut in the US. I couldn’t be happier than to have signed with Lou and his company, which is one of the most respected companies in the entire world. I have a great team surrounding me and I am going to continue working hard to become a future world champion under the DBE banner,” said Alonso.

In 2009, the Dominican-native Rojas traveled into enemy territory and captured the coveted WBC featherweight title with a dominant 12-round decision over reigning champion Takahiro Ao, in Ao’s backyard of Tokyo. Rojas defended his title just five months later with another impressive decision victory, this time over Guty Espadas Jr. He would lose the title in April 2012 to Jhonny Gonzalez via decision.

After the loss to Gonzalez, Rojas sat on the sidelines, as he sorted out promotional and managerial issues. Now with new manager Joe Duva and promoter DiBella Entertainment behind him, Rojas is ready to once again return to his world championship form.

After picking up boxing at the age of 16, Alonso quickly became one of the most promising amateur prospects in the entire country of Spain compiling an outstanding record of 98-12 and earning a spot on the 2012 Olympic team. Now at 23 years of age, Alonso is eager to show the boxing world that he has the goods to become one of the best fighters ever to emerge from the country.