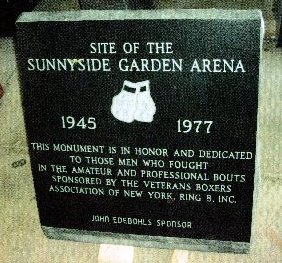 Ring 8 will host a commemorative ceremony for the old Sunnyside Garden Arena this Saturday afternoon, October 6, starting at 12 noon, highlighted by the unveiling of a monument on the site of the former sports venue at 44-10 Queens Boulevard in Sunnyside, New York.

The Sunnyside Garden Arena monument reads: This monument is in honor and dedicated to those men who fought in the amateurs and professional bouts.

Originally built in 1926 by railroad baron, Jay Gould, as a private tennis club, the property was sold in 1945 and became a public arena, hosting amateur and professional boxing, wrestling, roller derby and kick-boxing during the next 32 years. Several films were shot there, including Mr. Universe in 1951, starring Vincent Edwards, and President John F. Kennedy campaigned in front of Sunnyside Garden Arena in 1960.

Boxing, however, was its main attraction, seating 2000 with tickets back costing only $4.00 for general admission and $8.00 for ringside. Before television, Sunnyside Garden Arena served as sort of a minor league system for boxing, noted by the Ring 8 member and Daily News cartoonist, the late Bill Gallo, whose father reported fights for the New York Sun. Fighters who consistently won fights at Sunnyside Garden Arena often graduated to the Mecca in Manhattan, Madison Square Garden.