It’s a first BT Sport Fight Night offering of the year at the iconic York Hall in Bethnal Green this Saturday, as Frank Warren promotes a night spearheaded by young up and coming talent.

Top of the bill is a rematch that took place at the same venue on a warm late Summer’s evening in September last year. Many observers felt that Lichfield’s Brad Foster (11-0-2, KO4) was fortunate to keep his British and Commonwealth Super-Bantamweight belts in a majority draw with Lucien Reid (8-0-2, KO4), so a rematch was a natural, and it’s an immediate one for both men. The pair were both cut in the orignal meeting, but Reid generally seemed to control the action, a view not shared by two judges tallying a draw (the third scored 116-112 for Reid).

Former kick boxer, Foster picked up the vacant British belt in March last year, with an upset win against the experienced, Josh Wale in a wide points victory. He added the Commonwealth crown in his next outing, with a final round stoppage of the game, Ashley Lane in Stevenage.

West Ham’s, ‘Lethal’ Lucien Reid is on a run of two straight draws, as, prior to the Foster stalemate, a nasty cut above his right eye forced a technical draw with Indi Sangha in March last year after three rounds. Reid has mainly risen to title level against journeyman type opposition, but certainly rose to the occasion against Foster last time out.

Prediction: This is a tough one to call, as it could come down to who has made the necessary adjustments from the first fight. Foster will need to assert himself more in the rematch, as he allowed Reid to dictate at times. I think Reid will again stick to his skills, and this time should get a better shake from the judges in a close points win.

A potential cracker on the undercard sees the talented prospect, Kody Davies (10-0, KO3) take on Umar Sadiq (9-1, KO6) over ten. Welshman Davies is dropping down from Light-Heavyweight for this Super-Middleweight attraction, and had already won an eliminator for the Lonsdale Belt at 175lbs in his last fight, but moves down to compete in a British title eliminator at the lower weight against the tall and slippery, Sadiq. 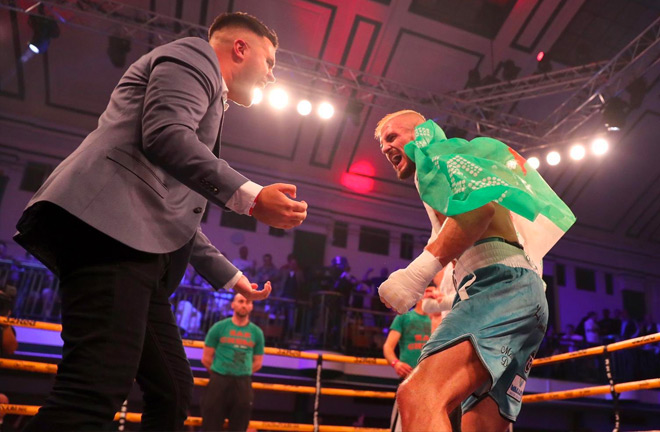 Davies came through an absorbing contest with Zak Chelli in that Light-Heavyweight eliminator last September, getting up off the deck in the second to take an unanimous points win. The Gavin Rees charge has been impressively going about his business, and isn’t afraid of a challenge in order to step up. The same can apply to Umar Sadiq, who took on Chelli very early on in both fighter’s careers in October 2018. Sadiq was floored in the sixth, and lost an eight rounder by three points in what remains his sole career reverse. The Nigerian born, Ilford resident has won six on the bounce since, but against opponents that have lost more than they have won.

Prediction: This is a really well matched contest, with British champion, Lerrone Richards an easy fight to make for the victor, with all men under the Frank Warren promotional banner. The fight between Davies and Sadiq could well be fight of the night, with Kody’s aggressive style hopefully gelling well with Sadiq’s slick skills. I think Davies is destined to go far in the sport, and I favour him to come out on the right side of a points win.

Several Frank Warren hot properties are on show in the capital.

Willy Hutchinson (10-0, KO7) continues his education in a Light-Heavyweight eight rounder against an opponent yet to be announced as this article was being written.

Dennis McCann (5-0, KO4) is fast gaining a reputation as a devastating puncher, and he goes in over six at Bantamweight against well travelled, Spanish based, Nicaraguan, Pablo Narvaez (9-19-7, KO1). Narvaez has been stopped inside a round against the likes of James “Jazza” Dickens and Jack Bateson, so it’s highly unlikely he will hear the final bell here. McCann should be able to shift the visitor within a couple of rounds.

Louie Lynn (5-0, KO4) meets Brayan Mairena (10-15-1, KO4) in a six rounder at Featherweight. Mairena is durable and has only been stopped twice in his career, against Gamal Yafai and James Tennyson, and has gone the distance with the like of Kid Galahad, Isaac Lowe and Thomas Patrick Ward. This should be a comfortable points win for Surrey’s Lynn, but a stoppage victory would certainly make a statement.