Saturday night at the Cosmopolitan Hotel in Las Vegas sees the return of Carl Frampton (26-2, KO15), after a near twelve month layoff.

Frampton’s comeback was scheduled to take place back in August, but a freak injury ruled the Belfast man out on the week of the fight against Emmanuel Dominguez. 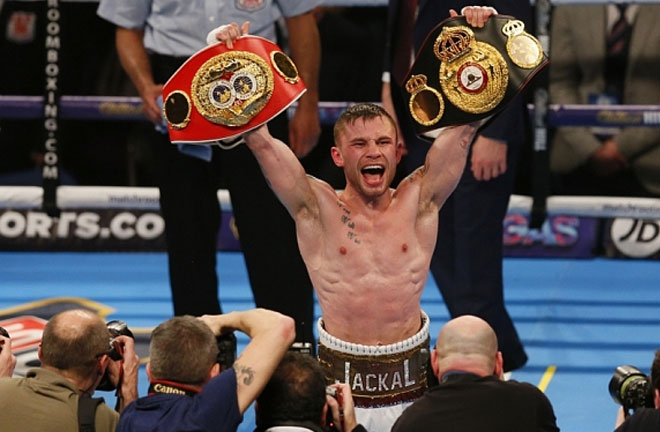 A large concrete pillar in a Philadelphia hotel lobby accidentally fell on his left hand, fracturing the fifth metacarpal in the process. The 32-year-old now winds up in Sin City, and originally the plan was a collision course with Oscar Valdez, who also appears on this card, but now the target appears to be WBO super featherweight champion, Jamal Herring.

Since unifying the super bantamweight division in 2016 with a split decision win against bitter rival Scott Quigg, “The Jackal” turned his attentions to the featherweights, taking the WBA belt from Leo Santa Cruz in July 2016.

Frampton edged out the Mexican in a classic in Brooklyn via majority decision, and a rematch was natural. This took place in January 2017, and Santa Cruz turned the tables with a majority win of his own to hand Frampton his first career loss.

Vegas is mad. The mecca of boxing. Proud that it will be my second time fighting here on Saturday. Cant wait. #FramptonMcCreary #StillFrampton

There were suggestions Frampton was on the slide, as he came back in Belfast in November of 2017, and was dropped in the seventh against Horatio Garcia before winning on the cards.

Frampton was last seen in December last year in Manchester, where he started as favourite against IBF champion, Josh Warrington, but was out hustled and bullied by the Leeds man in a unanimous points reverse.

Frampton’s assignment this weekend for his return comes in the form of Ohio’s Tyler McCreary (16-0-1, KO7), and the bout takes place over ten rounds at a catchweight of 128lbs, allowing the Northern Irishman to carefully plot his next move.

26-year-old McCreary has never been past eight rounds as a professional, and was last seen squeaking past Jessie Cris Rosales via split decision in July. Prior to this, he was held to a six round draw by Roberto Castaneda, who held a 23-11-1 record before their meeting.

Prediction: If Frampton can get back to his best here, then the world champions at feather and super feather beckon. McCreary looks tailor made for the Irishman, and, if he can utilise his pressure fighting style, he can remove McCreary from warefare late on in this one.

A crucial clash will unfold between Carlos Adames (18-0) and Patrick Teixeira (30-1) who contest the interim WBO Super Welterweight world title.

A victory will likely elevate the winner towards a vacant WBO shot with the fearsome current holder Jamie Munguia (34-0) set to relinquish the title and move up to middleweight to face Spike O’Sullivan in January.

Just in case you forgot what Carlos Adames is bringing to the table for Thanksgiving weekend … 😳#ValdezGutierrez | Nov. 30 | ESPN+ pic.twitter.com/EWhHQzICfO

This has all the makings of a firefight, with Dominican Republic-born Adames wiithout a blemish on his record.

The 25-year-old has been out of the ring since beating Patrick Day in June, with the American tragically losing his life in Chicago in October.

Brazilian Teixeira, a two-time WBO Latino titlist has won four on the spin since his solitary loss in 2016 and fights for the third time in Vegas on Saturday night.

Prediction: A close fight to call between two men desperate to cement a world title shot. Teixeira will be in confident mood despite being on away soil following four successive victories but you have to lean towards the big-punching Adames, who is the younger, fresher man on a close points success. 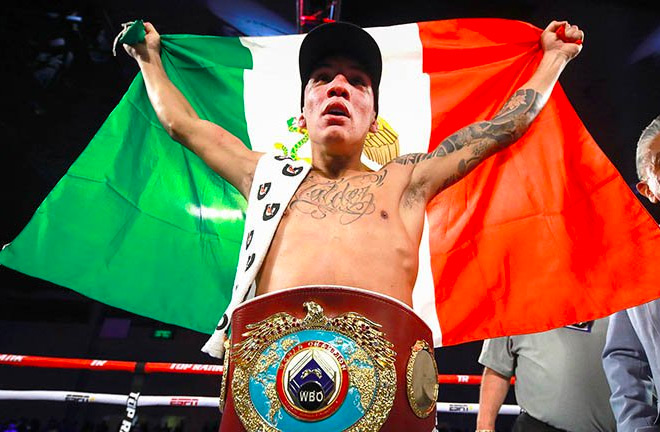 Valdez had been a belt holder at 126lbs since July 2016, when he stopped Matias Rueda in two rounds for the vacant WBO belt. He defended six times in total, against the likes of Miguel Marriaga, Genesis Servania and Scott Quigg (all unanimous), but found a lack of meaningful fights at the weight. He was last seen in June, dropping and then widely outscoring Jason Sanchez in Reno.

Guttierez unsuccessfully challenged for the WBA featherweight title in October 2017 when a badly cut left eye against the champion, Abner Mares, took the fight to the cards, where Mares won widely after ten rounds. The Guadalajara resident is unbeaten in two since, with back-to-back points wins against Ramiro Blanco and Tomas Rojas in his native Mexico.

Prediction: It should be a gentle introduction to super featherweight life for Valdez here, as Guttierez is a type that likes to charge in, and abandon the basics. Guttierez is also prone to cuts from clashes of heads, and Valdez will look to exploit this. I fancy Oscar to carve up a mid to late stoppage in this one.