Golden Boy Promotions returns to San Antonio, Texas on Thursday, March 12 with a special HBO Latino Boxing two-fight live telecast co-promoted by Leija*Battah Promotions. In the headlining bout, 2008 Mexican Olympian Francisco “El Bandido” Vargas (21-0-1, 15 KOs) will put his undefeated record on the line when he faces off against Australian “Wild” Will Tomlinson (23-1-1, 13 KOs) from the Freeman Coliseum in San Antonio, Texas. 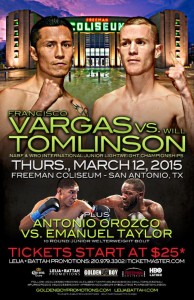 “I am preparing for the best Tomlinson can give me,” said Vargas. “This fight is very important for me, a win would only get me closer to a world title fight. My manager Joel De La Hoya and Golden Boy Promotions are guiding me down the best path and I can promise that I will give them and the fans the best fight on March 12.”

“I am very excited to fight Francisco Vargas,” said Tomlinson. “He is a hungry, aggressive fighter. I think I have the speed, strength and movement to not only beat Francisco but also to give the fans one hell of a fight and introduce myself to the Latino fans. It’s an honor to be fighting for the NABF and WBO International titles and I will proudly hold them high after a solid win in San Antonio.”

“Undefeated records, title shots and the opportunity for even bigger fights down the road – with so much on the line, fans can bet that fireworks will be in great supply on March 12,” said Golden Boy Promotions Founder and President Oscar De La Hoya.

“I’d like to thank my promoter Golden Boy Promotions and HBO Latino Boxing for this opportunity,” said Orozco. “I am ready to put up a good fight for the fans. I know Emanuel Taylor is a tough fighter but I am more than ready to showcase my talent. This is another step closer to becoming a world champion.”

“I can’t wait to fight on HBO Latino on March 12th. I will be 100% ready and I know it will be a good fight with Orozco,” said Taylor. “I am very confident that I will win this fight. I want to thank my promoter Joe DeGuardia and Star Boxing as well as Golden Boy Promotions and HBO Latino Boxing for giving me this opportunity.”

“We are looking forward to watching Taylor fight again and expect an extremely exciting fight against Orozco,” said Joe DeGuardia, President and CEO of Star Boxing. “Taylor showed his grit against Adrien Broner last September and we have high hopes for him on March 12 and the rest of 2015.”

Born in Tijuana and now fighting out of Mexico City, the 2008 Olympian Vargas had a notable win over Abner Cotto, and defended his WBO International and NABF Junior Lightweight titles against former world champion Juan Manuel Lopez in 2014. The 30-year-old closed out the year with an eighth-round knockout victory over the tough Genaro Camargo in Nuevo Leon, Mexico.

A Melbourne, Australia native Tomlinson won and successfully defended several regional titles down under. He was racing toward a world title shot before an upset loss to Jerry Belmontes in March 2014. The 28-year-old wasn’t deterred from his path and in August he bounced back with a victory over Alberto Cupido and a technical knockout win over Miguel Zamudio in December that put him on the road to the top once more.

An undefeated star from Tecate, Baja California, Mexico and fighting out of San Diego, Calif. Orozco has kept an impressive undefeated record since turning professional in 2008. 2014 was a successful year for Orozco, winning the vacant NABF Junior Super Lightweight title against Martin Honorio via unanimous decision in May. The 27-year-old was most recently seen in a battle against Steve “2 Pound” Forbes at Fantasy Springs Resort Casino in October also winning by unanimous decision after an eight-round fight.

Fighting out of Edgewood Arsenal, Maryland, Taylor is a tough warrior who was first noticed when he went the distance with Chris Algieri in February 2014. Next, the tough boxer rebounded with a win via unanimous decision over Karim Mayfield in August setting him up to fight the toughest fight of his career against Adrien Broner in September. Taylor didn’t disappoint as he went the distance in a 12-round bout against Broner in Broner’s hometown of Cincinnati, Ohio. Now, the 24-year-old Taylor is looking to rebound once again and prove that his is still in the game to win a world title.