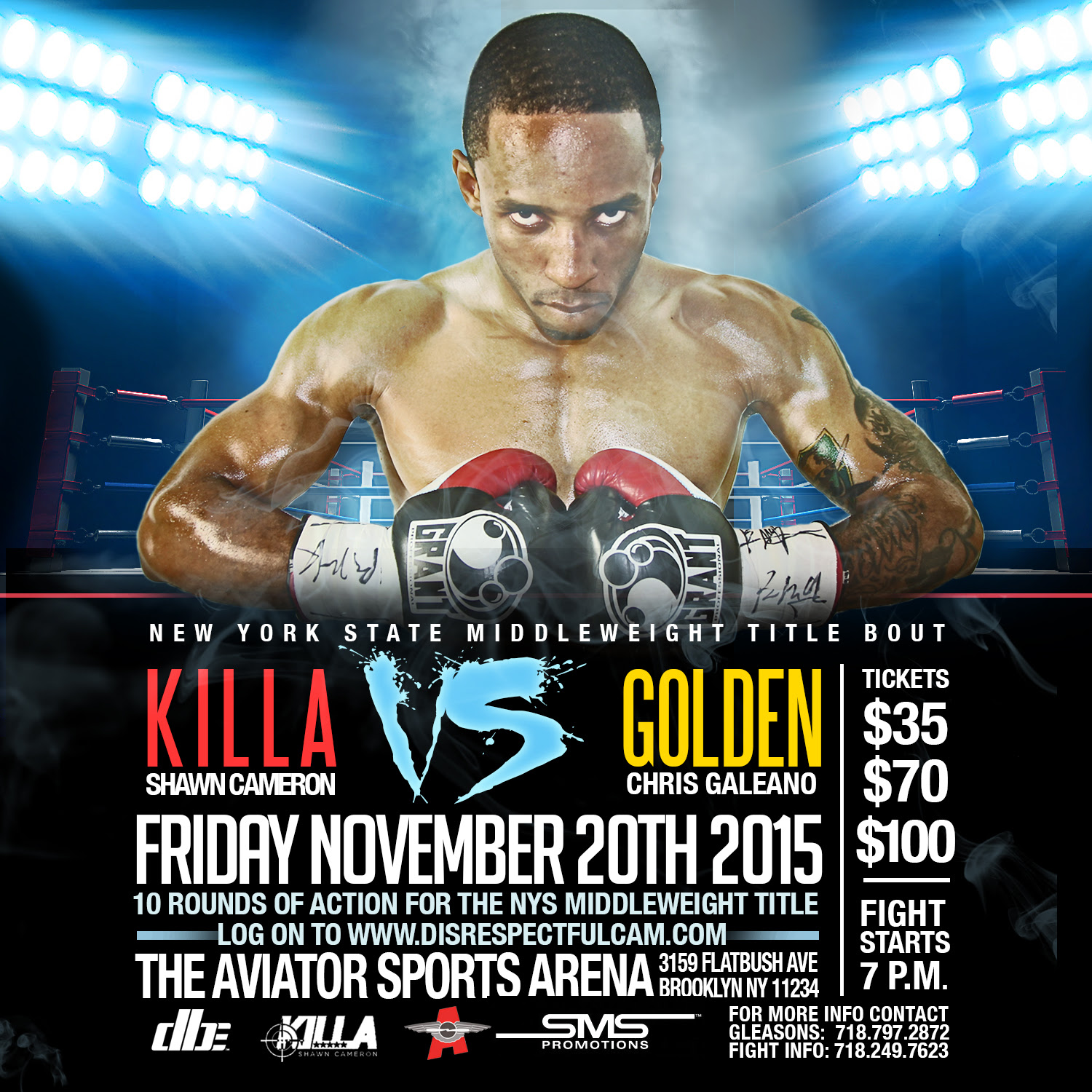 This Friday, DiBella Entertainment’s Broadway Boxing returns to the Aviator Sports and Events Center in Brooklyn, NY, for the latest installment of the popular series. Headlining the card will be undefeated prospects Chris Galeano (9-0, 1KO) and Shawn Cameron (10-0, 5KO’s) as the two square off in a 10-round battle for NYC bragging rights.

In the co-feature bout, Brooklyn’s own former two-time world champion Amanda Serrano (25-1-1, 18KO’s) will continue her quest toward another world championship when she squares off against Djemilla Gontaruk (9-2, 1KO) in a 10-round super featherweight matchup. The bout against Gontaruk will be Serrano’s fourth of 2015, as she seeks to reclaim a piece of the super featherweight crown.

Eager to finish off his year strong will be former #1-rated U.S. amateur and NY Golden Gloves champion Patrick Day (11-1-1, 6KO’s) as he squares off against Carlos Garcia in a scheduled eight-round junior middleweight matchup. The 23-year-old Day suffered his first loss as a professional back in January of this year, when he dropped an entertaining majority decision to fellow up-and-coming prospect Alantez Fox on SHOWTIME’s ShoBox: The New Generation. Day bounced back nicely from the defeat, winning two bouts in April and July, and is resolute to make it three in a row when he faces the Puerto Rican Garcia on Friday night.

Popular Irish welterweight Noel Murphy (4-0, 2KO’s) is also set to see action in one of the featured undercard bouts, as he battles Anton Williamson in their scheduled four-rounder. A native of County Cork, Ireland, the 21-year-old Murphy was a multi-time national champion as an amateur before relocating to Yonkers, NY, and embarking on his professional career in November of last year. Murphy has quickly become one of the more popular up-and-comers throughout the New York area and will be looking to impress in front of his growing allegiance of fans when he challenges Williamson.

Intent on breaking onto the national scene in 2016, Quebec’s undefeated super middleweight Francy Ntetu (15-0, 3KO’s) is determined to keep his undefeated record intact when he competes against Oscar Riojas (9-3, 3KO’s) in their scheduled eight-rounder.

Making his U.S. debut on the card will be Russia’s WBO European middleweight champion Artur Akavav (14-1, 5KO’s) as he boxes Fredy Lopez (9-2, 7KO’s) in a scheduled eight-round middleweight matchup. Akavav has rattled off nine consecutive victories since dropping a close decision to Oleg Liseev in 2012. Akavav would like to throw his name into the mix of the loaded middleweight division in 2016, but must first take care of business against Lopez.

Rounding out the card will be Long Island’s pro-debuting Tyrone James, as he takes on David Perez in a four-round welterweight matchup. James had a very successful amateur career, which included a finals appearance at the 2015 Golden Gloves and winning the NY Amateur Boxing championships this year as well.