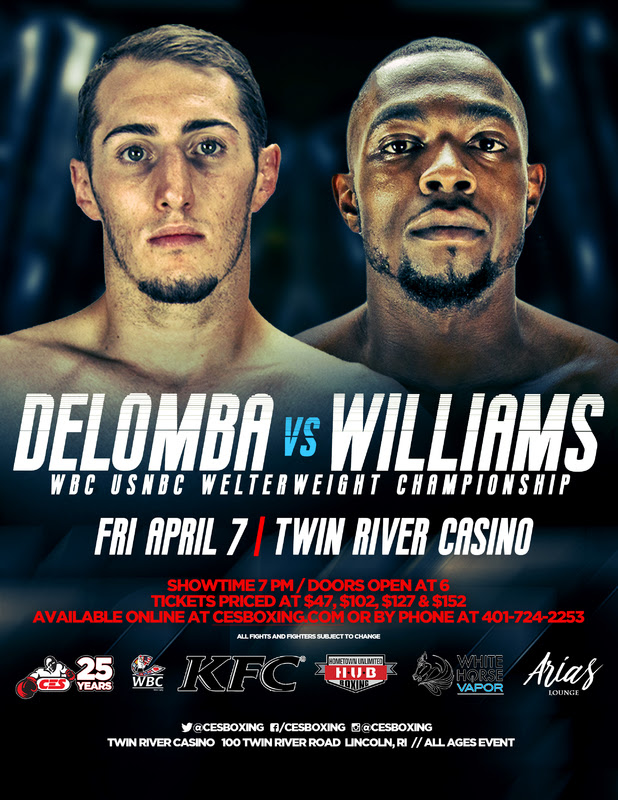 “This fight didn’t need any additional buzz, but it’s only fitting that after 25 years of building champions throughout the world we crown another worthy contender April 7th at the premier venue for boxing in New England,” Burchfield Sr. said.

“We’ve watched Nick DeLomba and Jimmy Williams grow tremendously through the years. They debuted with us four years ago and have been a part of our family every since. We’ve been there through the ups and downs. Now it’s time they put their records and reputations on the line in the biggest fight of their careers with the prestigious green belt up for grabs.

“There are ‘promoters’ everywhere and shows on every corner of the globe, but only few can present promising young fighters with an opportunity to take their careers to the next level. Our relationship with the WBC spans decades, and it’s an honor to bring one of boxing’s most renowned championships back to New England.

“No one is more deserving of this opportunity than Nick DeLomba and Jimmy Williams.”

The USNBC title is a proven path to championship glory for up-and-coming fighters and will provide either DeLomba or Williams with a chance to achieve worldwide notoriety in the welterweight division.

The 27-year-old DeLomba has won his last three bouts since suffering his first and only loss in 2015, defeating Freddy Sanchez, Oscar Bonilla and southpaw Amos Cowart. Williams, 30, originally from Plainfield, N.J., has only one blemish on his record, a draw against Greg Jackson in 2013. He’s won his last eight, including dazzling knockouts against Christian Lao and Eddie Caminero and a hard-fought unanimous decision win over veteran Manny Woods at Twin River in May.

April 7th will also be an emotional night for the Lopes family of Marshfield, Mass., as former welterweight world-title challenger Aleksandra Magdziak Lopes (16-4-2, 1 KO) and stepson Arturo Lopes (1-0) fight together on the same card for the first time in eight years in memory of the late Manny Lopes, a former CES standout who passed away in December and will subsequently be inducted into the CES Ring of Honor.