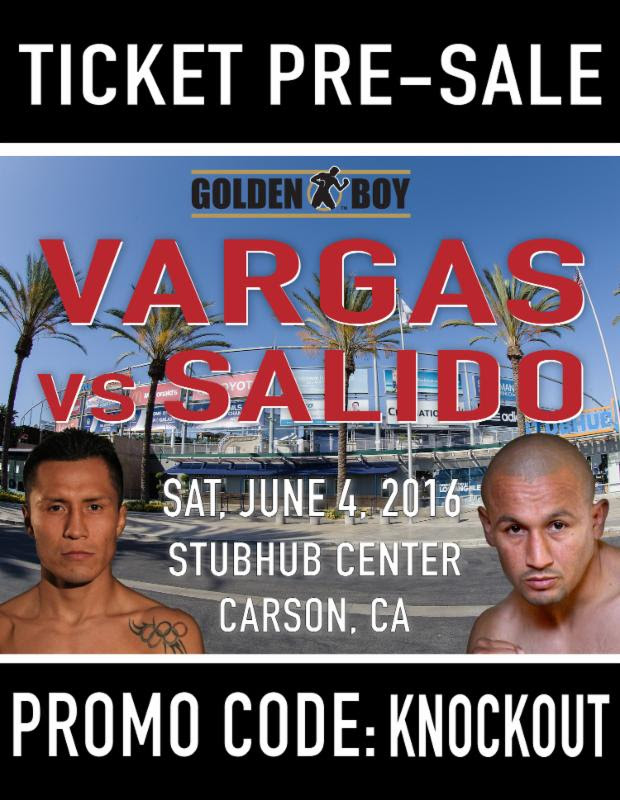 The StubHub Center in Carson, California has been home to some of the most epic fights of this era and on Saturday, June 4 another chapter will be added to its action-packed history. Francisco “El Bandido” Vargas (23-0-1, 17 KOs), fresh from his Fight of the Year victory over Takashi Miura, will defend his WBC Super Featherweight Title for the first time against fellow Mexican warrior Orlando “Siri” Salido (43-13-3, 30 KOs, 1 NC) on HBO Boxing After Dark.

Tickets for the epic showdown between two of Mexico’s most notable warriors will go on sale tomorrow, Friday, March 11 at 10:00 a.m. PT and are reasonably priced starting at $25. Fans will get to enjoy a great night of exciting fights where every seat is a great seat at the StubHub Center in Carson, Calif.

“I want to fight the best fighters and Orlando Salido is one of the top fighters in the sport,” said Francisco Vargas.

“I intend to retain my title and will be prepared to the best of my ability to dominate in the ring and give the fans a fight they will remember. I know it will be a tough fight, Salido brings a lot of experience, but I promise not to disappoint. In the end the fans will win on June 4, they will witness a battle between two Mexican warriors who will give it their all in the ring, it’s a can’t miss event.”

“I was 12-years-old when I saw my first fight on television,” said Orlando Salido.

“It was the great Julio Cesar Chavez Sr. and I watched him knockout his opponent and earn the prestigious green and gold belt. It was then that I knew then that’s what I wanted to do, become a world champion boxer just like my idol Julio Cesar Chavez Sr. So here I am, 23 years later looking to win the WBC belt and fulfill my lifelong dream of putting it around my waist. I want to give special thanks to the WBC President, Mauricio Sulaiman, son of the great Don Jose Sulaiman, HBO, Zanfer Promotions, Golden Boy Promotions and Francisco Vargas for giving me the chance to fight for the WBC Championship on June 4. I look forward to giving the fans an epic fight that will be remembered for years to come.”

“Francisco Vargas will make his much anticipated return to the ring on June 4 following his magnificent victory over Takashi Miura on the Cotto vs. Canelo undercard and let me say this: the fans will not be disappointed,” said Oscar De La Hoya, Chairman and CEO of Golden Boy Promotions.

“Francisco engaged in a bloodbath with Miura to claim the WBC Super Featherweight title, and he will not give that over easily to any opponent including Orlando Salido.”

“Hispanic fighters have played a very important role in boxing in the past 20 years,” said Fernando Beltran, President of Zanfer Promotions.

“I have been blessed to promote some greatest Hispanic fighters including Julio Cesar ‘J.C.’ Chavez Sr., Erik ‘El Terrible’ Morales, Juan Manuel ‘Dinamita’ Marquez, Jose Luis ‘El Temible’ Castillo, Marco Antonio ‘Baby Faced Assassin’ Barrera. Now with the help of HBO and Golden Boy Promotions, we are able to carry on this great tradition of giving the fans what they want to see. Orlando ‘Siri’ Salido and Francisco ‘El Bandido’ Vargas are two of the best warriors that we have from Mexico and come June 4 the real winners of this fight will be fans that will witness this epic match-up at the Stub Hub Center, live on HBO.”

“On June 4 boxing fans are in for a real treat when Francisco Vargas meets Orlando Salido in a showdown that has all corners of the boxing community energized with anticipation,” said Peter Nelson, Executive Vice President, HBO Sports.

“It’s a can’t miss battle that will have an electric atmosphere outdoors on fight night at the StubHub Center.”

“All fans will witness an action-packed fight with two of Mexico’ most notable warriors. Francisco is known for his exciting style and is a fighter that gives every fight 110%. I know he will be ready to defend his title against Orlando Salido. He will be ready to prove he is the best in the division.”

“First I would like to thank HBO for having the vision to bring this fight to HBO Boxing After Dark,” said Sean Gibbons, Manager of Orlando Salido.

“There are fights that need no hype and Francisco Vargas vs. Orlando Salido is one them. These are two real Mexican warriors who will give it their all inside the ring and I believe that we have here is a can’t miss Fight of The Year on June 4.”

“StubHub Center is the top outdoor boxing venue in the country and has hosted some of the best fights during our history,” said General Manager of StubHub Center Katie Pandolfo.

“We are excited to showcase another world-class boxing event in what will be an electric atmosphere at our facility.”

“We are excited to host another world-class event at the premier outdoor boxing venue in the United States,” said Katie Pandolfo, General Manager of StubHub Center.

“StubHub Center has been the site of a number of great fights and we look forward to an electric atmosphere for the June 4th event.”