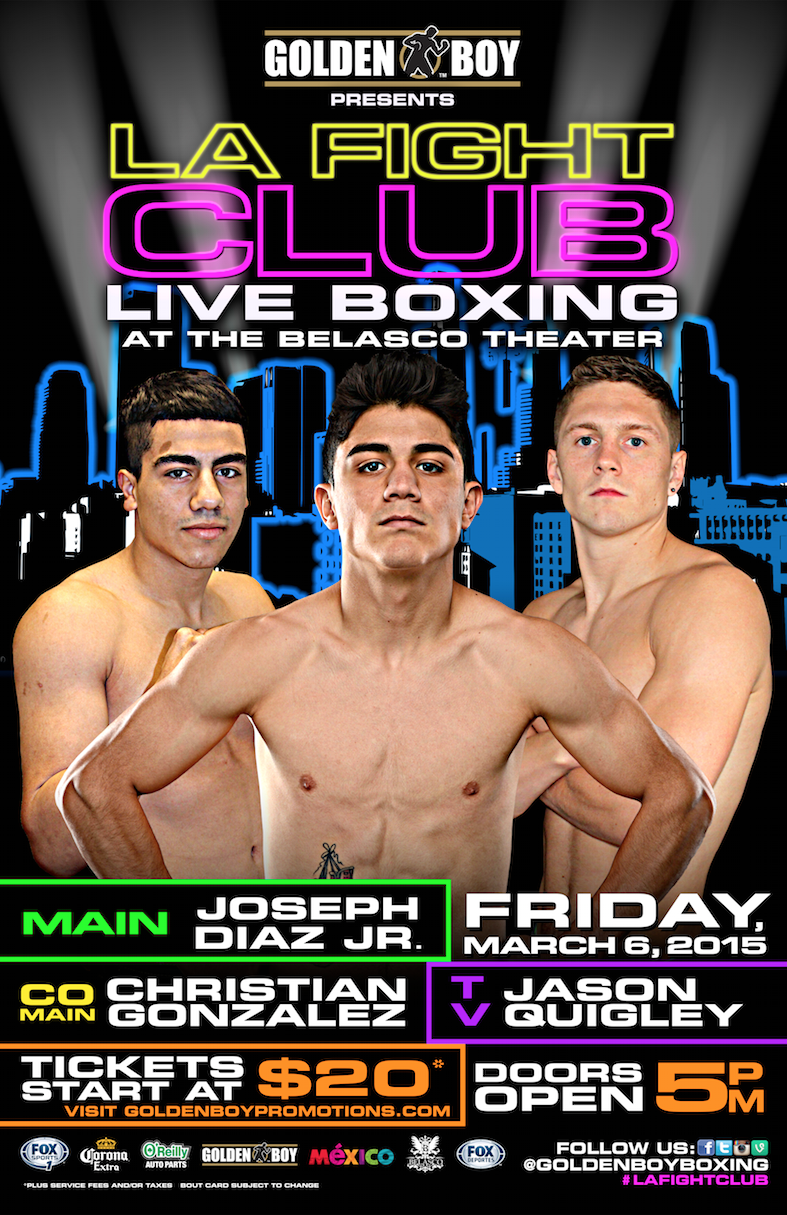 In the co-main event, rising super featherweight knockout artist Christian “Chimpa” Gonzalez (8-0, 8 KOs) will face an opponent yet to be named in a six-round fight. Opening the televised action is a super featherweight clash between a pair of Los Angeles prospects, as Santiago “El Lobito” Guevara (8-0, 3 KOs) squares off against Carlos “The Solution” Morales (6-1-3, 3 KOs) in a six-round bout. Plus, Irish middleweight prospect Jason Quigley (3-0, 3 KOs) will be featured in a four round bout hoping to get television air time against Lanny Dardar (2-2-2, 1 KOs) of Houma, Louisiana.

“The Belasco Theater is going to be the hottest, most exciting destination for action-packed, live entertainment in the city every month with LA FIGHT CLUB,” said Oscar De La Hoya. “There is no other entertainment option I’m aware of like LA FIGHT CLUB in Los Angeles. This unique event will give fans the opportunity to experience boxing like they never have before by getting close to the ring and enjoying the action-packed fights in an entertaining atmosphere. I am excited to host the inaugural LA FIGHT CLUB event and I invite all boxing fans in the city and beyond to meet me at The Belasco Theater on March 6.”

In the non-televised action, super lightweight prospect trained by former World Champion Fernando Vargas, Cesar “The Great” Quiñonez (1-0, 1 KO) will fight for the second time as a professional against an opponent to be named in a four round super lightweight fight. Quiñonez signed with Golden Boy Promotions before making his professional debut on January 17 in Las Vegas on the Deontay Wilder vs. Bermane Stiverne card in a wildly exciting second round knockout over Joan Jose Valenzuela.

Also featured on the exciting undercard will be three undefeated and talented rising stars of the sport. East Los Angeles native Roy Tapia (10-0-1, 5 KOs) will fight in a six-round super bantamweight battle against an opponent to be determined. Lightweight newcomer Jesus Delgado (3-0-1, 1 KO) will engage in a four round bout against Las Vegas’ Rocco Espinoza (4-11). Opening up the night, super bantamweight prospect Emilio Sanchez (6-0, 5 KOs) will face and opponent yet to be named in a four-round fight.

The Knockout Experience VIP package is also available for an additional $25 upgrade and includes access to an exclusive VIP Lounge and Bar; a meet and greet opportunity with Oscar De La Hoya, the fighters and other celebrities attending the event; as well as, a picture in the ring and an entry into the LA FIGHT CLUB grand prize drawing, which can include but is not limited to: backstage access, tour of locker rooms, fighter ring walk, tickets to upcoming boxing events and additional merchandise and prizes.

Golden Boy Promotions is offering a special for group ticket purchasers when you buy four $80 seats or six $40 seats you will receive an automatic upgrade to the LA FIGHT CLUB Knockout Experience. Group sales can be purchased online by clicking HERE and www.goldenboypromotions.com or by visiting the Golden Boy Promotions Facebook page.

A member of the 2012 U.S. Olympic team, South El Monte’s Diaz Jr. is rapidly displaying the skills and poise to become a feared contender in the sport. At just 21-years-old, Diaz is gearing up for his third headlining event on Golden Boy Live! and hoping to add Delgado to his list of victories, which already includes seasoned fighters Ramiro Robles, Raul Hidalgo, Roberto Castaneda and Jose Angel Barenza.

Fighting out of Tacubaya, Distrito Federal, Mexico, Delgado has a tall task in his U.S. debut when he takes on the undefeated former Olympian Diaz. A professional since 2010, he won his first 12 fights before suffering a defeat to Roberto Amador in 2012. He rebounded to win two more fights by knockout before losing a split decision to Edgar Lozano. Most recently, he won a knockout victory in October 2013 against Aaron Olivares. Now, Delgado looks to make his U.S. debut in-style on March 6.

A professional since 2013, the promising knockout artist Gonzalez of Buena Park, Calif. is a boxing legacy as his brother is the former WBC Featherweight World Champion Alejandro “Cobrita” Gonzalez. He has destroyed all willing to face him thus far in his career, winning each bout by knockout. Gonzalez has shown that he is a power puncher to watch in 2015 and beyond.

Guevara is a rising undefeated lightweight prospect that has been moving up the boxing ranks since his professional debut in 2011. New to the Golden Boy Promotions team, Guevara is ready to take his career to the next level when he faces off against Tulancingo, Hidalgo, Mexico’s Carlos Morales.

Now training out of Highland Park, Calif., Morales is a tough fighter looking to carry his winning streak into the New Year. Undefeated since 2013, Morales is looking to advance into the next stage in the lightweight division and beating Guevara will get him closer to his shot at a title match.

Hailing from Balleybofey in County Donegal, Ireland, the 22-year-old Quigley had an outstanding amateur career becaming the first Irish fighter to win a Silver medal at the AIBA World Amateur Boxing Championships in 2013, earned gold medals in the 2013 European Championships, the 2009 European Youth tournament and the 2012 European U23 Tournament. He started his professional career in 2014 and very quickly garnered attention as he quickly ending each of his fight via knockout against Howard Reece, Fernando Najera and Greg McCoy.

Louisiana native, Lanny Dardar is a relative newcomer looking to build his career. A professional since 2009 the 27-year-old took a break from boxing after his professional debut and in 2014 impressively took on five fights. Dardar is now looking to start 2015 in the right direction when he faces Quigley on March 6.

Tyson Fury: Tommy could have his worst night and beat Jake...