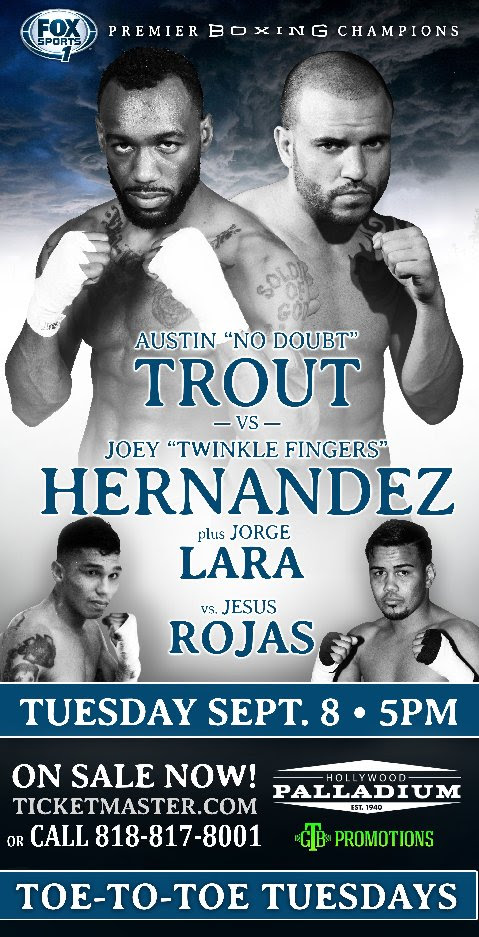 The September 8 event is headlined by the inaugural installment of TOE-TO-TOE TUESDAYS on FOX Sports 1 featuring a 10-round junior middleweight showdown between Austin “No Doubt” Trout (29-2, 16 KOs) and Joey “Twinkle Fingers” Hernandez (24-3-1, 14 KOs) in addition to the televised opener which pits Jorge Lara (27-0-1, 19 KOs) against Jesus Rojas (22-1-1, 15 KOs) in a 10-round featherweight attraction.

Rounding out the action will be undefeated 23-year-old prospect. Kevin Watts (7-0, 2 KOs) out of Los Angeles.

Tickets for the live event, which is promoted by TGB Promotions, are priced at $78.50, $53.50 and $28.50, not including applicable service charges and taxes and are on sale now. Tickets are available at www.ticketmaster.com. To charge by phone call Ticketmaster at (800) 745-3000.

Born in Cairo, Egypt, Elbiali moved to Florida at age five and eventually went on to have a successful amateur career that saw him win two Florida Golden Gloves titles. The 24-year-old is yet to taste defeat since turning pro in 2013 and has knocked out all but one opponent he’s faced. He takes on the 27-year-old Pena, who fights out of Fontana, California by way of Brazil.

An accomplished amateur who won the Chicago Golden Gloves and was the runner up in the National Gloves in 2013, Ramirez looks to continue his rise as he fights outside of his home state for the first time on September 8. The 23-year-old has scored two knockout victories in 2015, including a June knockout of Gerardo Cuevas. He takes on the 38-year-old former champion Cruz out of Baja California, Mexico in a six-round bout.

Santiago turned pro as a 19-year-old and at 24-years-old is undefeated since 2012. The Phoenix-born fighter has won seven straight including victories over Alex Rangel, Hanzel Martinez and German Meraz. He will be met by the experienced Lamacad out of Misamis Occidental, Philippines. The 29-year-old will be making his second career start in the U.S. and is coming off of two knockout wins.