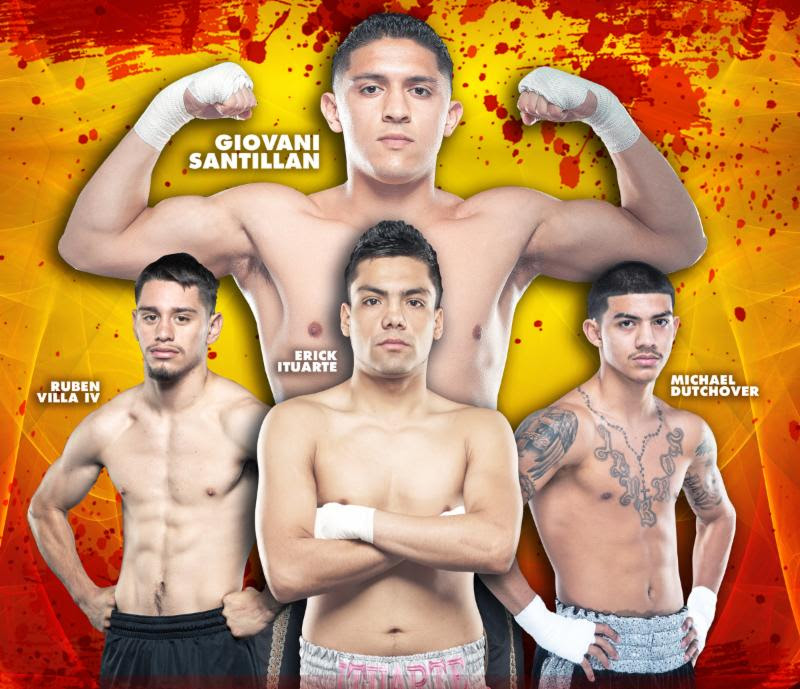 Santillan, a southpaw from San Diego, uses a brilliant combination of speed and power to stifle opponents. He is coming off a pair of wins against veteran boxer-punchers Jose Macias and Miguel Angel Mendoza.

“The quality of opposition has gotten better over the years,” Santillan said. “I’m working toward fighting the best that the junior welterweight division has to offer. I’ve had competitive sparring sessions with Floyd Mayweather and Tim Bradley so I know I can compete with the world title holders.”

Iturte, 22, is riding an eight fight winning streak dating back to the second half of 2014. Ituarte, who is from Santa Ana, Calif., has three wins in each of the last two years. He is a volume puncher with a fearless attitude.

“I make for exciting fights,” Ituarte said. “I’m not in there to dance with Castillo. I’m there to put the pressure on and get a win.”

In other action, blue chip featherweight prospect Ruben Villa (3-0, 2 KOs) of Salinas, Calif. looks to improve his record against Francisco Camacho (2-6-1, 1 KO) of Tamaulipas, Mexico in a scheduled 4-rounder.

Villa, 19, began his career last year with back-to-back knockout victories. The southpaw swept all three scorecards in his last outing, a 4-round unanimous decision win over the previously unbeaten Aaron Lopez in November.

“The goal is to improve with every fight,” said Villa, who is co-promoted by Thompson Boxing and Banner Promotions. “We’ve been in camp since late last year and we’re ready for another win.”

Additionally on “Path to Glory,” Michael Dutchover (2-0, 2 KOs) of Midland, Tex., who is also a highly regarded prospect, fights an opponent to be named later (4-rounds/junior lightweights).