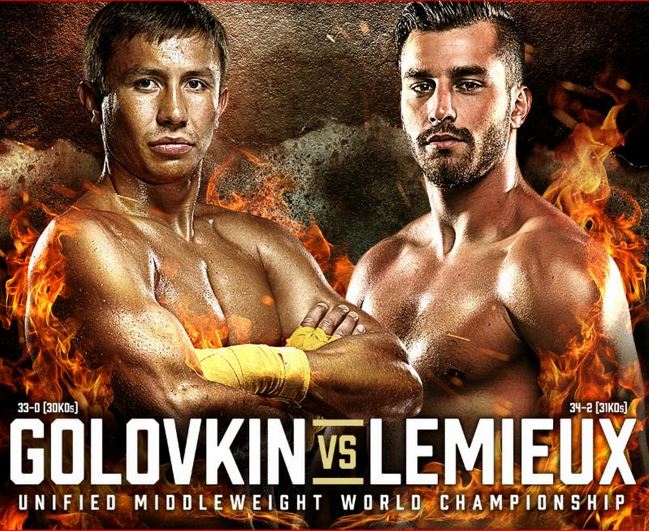 A new Madison Square Garden box office record has been set by the highly anticipated title unification between Gennady “GGG” Golovkin, (33-0, 30KO’s), and David Lemieux (34-2, 31KO’s) headlining the historic venue on Saturday, October 17, with 6,000 tickets being sold in the pre-sale.

“The interest from fans in this middleweight title unification has been overwhelming,” said Tom Loeffler of K2 Promotions. “Madison Square Garden has never had a faster pre-sale for a boxing event. With this high level of interest we strongly encourage boxing fans to purchase their tickets well in advance. We’re ecstatic at the response from the pre-sale and look forward to very strong ticket sales continuing throughout the promotion.”

“This record-breaking pre-sale only confirms that this fight will be one of the most exciting of the year as the best meets the best for middleweight supremacy,” said Oscar De La Hoya, Chairman and CEO of Golden Boy Promotions. “Fans are thirsty for action and they know that is what David Lemieux and Gennady Golovkin will deliver on October 17 at Madison Square Garden.”

“It’s not a surprise and we are thrilled that tickets are going fast for Golovkin vs. Lemieux at The Garden on October 17th,” said Joel Fisher, executive vice president, MSG Sports. “Gennady has made a name for himself in New York – he has fought at The Garden three times and knocked out all three opponents. Between Golovkin and Lemieux they have a staggering 61 KO’s in 69 fights and we’re urging fans not to blink once the bell rings.”

Who is next for Conor Benn after knocking out Samuel Vargas?

Saunders: The closest Eubank Jr will get to Canelo is a ringside ticket