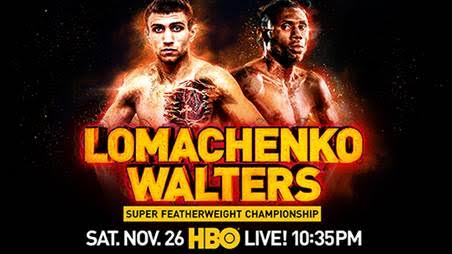 Lomachenko will defend his World Boxing Organization (WBO) junior lightweight title against Walters This Saturday, Nov. 26, at The Chelsea inside The Cosmopolitan of Las Vegas. It will be televised live on HBO World Championship Boxing® beginning at 10:35 p.m. ET/PT. This will mark the 2,000th event Arum has promoted, dating back to March 29, 1966, when World Heavyweight Champion Muhammad Ali defended his title against George Chuvalo. The HBO® telecast will also feature the replay of last week’s controversial light heavyweight title fight between Sergey Kovalev and Andre Ward.

BOB ARUM: This is my 2000th event and this fight is worthy of being my 2,000th event. Nicholas Walters is the hardest puncher in these divisions — they don’t call him the “Axe Man” for nothing and he always give 100%. And Vasyl Lomachenko is an unbelievable technician who has done really the impossible, winning world titles in two divisions in a record-few seven professional fights. So I look for a Fight of the Year candidate on Saturday night at The Cosmopolitan of Las Vegas and everybody can watch it live on HBO in addition to the replay of the controversial fight from Saturday between Kovalev and Ward. And what I think is the Fight of the Year candidate Lomachenko vs. Walters. I’m a big fan of both guys. I think Walters is a tremendous fighter and I enjoy the way he fights.

LOMACHENKO: I would like to congratulate Bob Arum on his 2000th event and I am proud to be on his 2000th fight card. I wish him very good health and I hope he can make a 2,500th card so I can be on that also.

Why the interest in fighting Walters now when there were trepidations before?

How do you think this fight will go with Walters since he is a bigger boxer?

Where did you learn your creativity? Were there any boxers you watch while younger that you learned from?

There is a video on You Tube that compares Vasyl to The Matrix. Have you seen the video? What is your reaction? There are many people outside of boxing that have seen this video…

LOMACHENKO: This is exactly what I wanted to do. I wanted to let different people know, people outside of boxing, to know me. I think the boxing game is one that people have forgotten about and they are not enjoying it as much. I want to bring back and show how interesting boxing can be. I am the motherboard.

Do you have a plan for the future? What do you see as the endgame?

LOMACHENKO: For sure I was thinking about that, and my contract is over in six or seven months and that’s when I am thinking about finishing my career (laughing at his joke).

You have fought a lot of amateurs – when you fight a fighter like Walters who sometimes swings for the fences, what typically has happened in those type fights?

LOMACHENKO: If we are talking about the amateurs – the punchers never got anywhere in their careers. Usually three rounds was not enough time to get ready for the fight. The punchers are professional boxers not amateur boxers.

How do you see this fight playing out?

I LOMACHENKO: I think it is going to be very, very hard for me in the first four rounds, then after that I will be trying to terminate the bout.

This is a big fight, but how do you see Lomachenko in the bigger fights in the larger arenas?

BOB ARUM: Lomachenko has a huge upside. This is the second world title in as many divisions in seven professional fights – that has never happened before, and he is going to win more world titles as he goes up in weight and there are going to be very interesting guys for him to fight. It is not beyond the realm of possibility that he and Manny [Pacquiao] could fight sometime next year. Lomachenko wants challenges and he is a tremendous talent. His upside is enormous and a lot of people are watching him — not just boxing fans — because he is an unbelievable talent. They see him on You Tube and on HBO and have said what an unbelievable talent he is.

Do you want to fight Manny Pacquiao?

LOMACHENKO: Yes, of course I would like to fight Pacquiao, but not in the next fight.

What makes this a can’t-miss fight?

BOB ARUM: They call Walters the Axe Man for a reason — he searches and destroys. He is a tremendous puncher and he is in with a technician who has enormous talent in boxing not only defensively but offensively, so this is a can’t-miss fight and I want the people to realize that not only do I believe that it will be a Fight of the Year candidate, I believe that if Vasyl Lomachenko is successful, he should be right up there for consideration for Fighter of the Year.

Do you feel like you may want to slow Lomachenko down a little bit?

BOB ARUM: From the first day I met him, when he sat down with me and we discussed his future, I was concerned because people were offering him large signing bonuses, he told me that he didn’t want a signing bonus; he wanted to earn his own money. All he wanted was challenges that I would present to him. That’s what I am going to do. He doesn’t want any gimmes – he wants every fight to be a challenge. So at 130-pounds, who is more of a challenge than Nicholas Walters? I am not going to slow him down. He knows his ability a lot more than I do. And you have to give his father credit – his father is probably the best trainer in boxing today and I say that without any question, because look what the father produced from the Ukrainian Olympic team in London. Oleksandr Usuyk who is now a cruiserweight champion, Alexandr Gvozdyk, a light heavyweight who you saw last week on the Ward-Kovalev pay-per-view, who is a future champion – they are all Ukrainians and they were all trained by Vasyl’s father. So he has a lot going for him.

How will you deal with the reach advantage that Walters has?

LOMACHENKO: Boxers always have an advantage over another, whether it is a longer reach or more weight or a taller guy. How I will use his reach advantage to my advantage, you will find out on Saturday.

What do you think when someone of Bob’s stature speaks so highly of you?

LOMACHENKO: It will give me another motivation because a lot of people may look at that or hear that and think that maybe it’s not true. When I hear that it gives me a lot of motivation to make me work harder in my training to prove that what Bob is saying. I don’t have the chance to make any mistakes. I have to prove that Bob is right.

Do you think the layoff will affect you?

WALTERS: The layoff? I am in the motivation business, so the layoff is definitely part of the boxing business. As a fighter I have always been in the gym working out and everything so the layoff wouldn’t even bother me and I wouldn’t take the fight if I thought I wasn’t going to be ready for the fight. I don’t even think for a minute that I only want to please Nicholas. I want to please the fans and my country, both Panama and Jamaica and all of my fans in Mexico and all over the world. I am not just taking the fight for Nicholas. I am taking the fight for everybody and come Saturday I am going to be ready for the fight – just like all of the other fights.

How do you feel about taking on this fighter that is a two-division world champion in only seven pro fights and that everyone is saying is so great?

WALTERS: The achievement is good for him. And Bob knows what he is talking about since he has been in the business for 50 years. Even Muhammad Ali lost fights. I don’t think this is a different Lomachenko from the guy that lost to Salido – he is the same Lomachenko. They say a leopard cannot change his spots right? Since he did lose to Salido, he can be as technical all he wants, but I am in the hurt business – this is a gladiator sport and I fight all of my fights like that, I fight like a gladiator. He can come in with his technical fight on Saturday and I am going to be up for it and put on a helluva show on Saturday night.

You don’t see much development in Lomachenko and feel he is ripe for the taking with your power punching?

WALTERS: Each fight is different and I am not going to tell you that I am going to fight Lomachenko the same way that Salido fought him. Of course, only a fool doesn’t learn from his mistakes, doesn’t learn from his mistakes in the ring. He has been training and working out so I know he is a more complete fighter than his first fight. I am not even worried, so to speak, but I know that he has learned and is a better fighter from that loss. But it is still a blemish on his record that he lost. With that in mind he has tasted defeat and I have never tasted defeat. We have stayed undefeated and we are going to keep it that way this Saturday.

What would this victory mean to you and your career?

WALTERS: I don’t know. This fight for me is just as important as my last fight. Each fight I have I fight hard and I fight tough. In each fight for me I defend my undefeated record. Each fight for me I am defending my pride. This victory would be a big victory because we know that this guy is no easy fight. We are not saying that Lomachenko is an easy opponent. We know he is a top fighter and a tough fighter. We are just saying that this Saturday and this victory is going to put the Axe Man to where I want to be and hopefully next year I start making over $1 million per fight. That’s what we are aiming at. So we win Saturday then move on to other opponents.

BOB ARUM: I am absolutely thrilled that this fight between Lomachenko and Walters will be my 2000th boxing event and will definitely be a candidate for Fight of the Year with two great fighters. The HBO telecast will begin at 10:35 p.m. ET / 10:30 p.m. PT. The Kovalev-Ward replay will also be part of the HBO telecast. That fight’s scoring was very controversial so if you haven’t seen it this is your chance. Then watch the Fight of the Year, I believe, between Lomachenko and Walters. There were only 60 tickets left this morning at The Cosmopolitan and it will probably be sold out by the end of today so the best way to see the fight, if you don’t have a ticket, is on HBO.