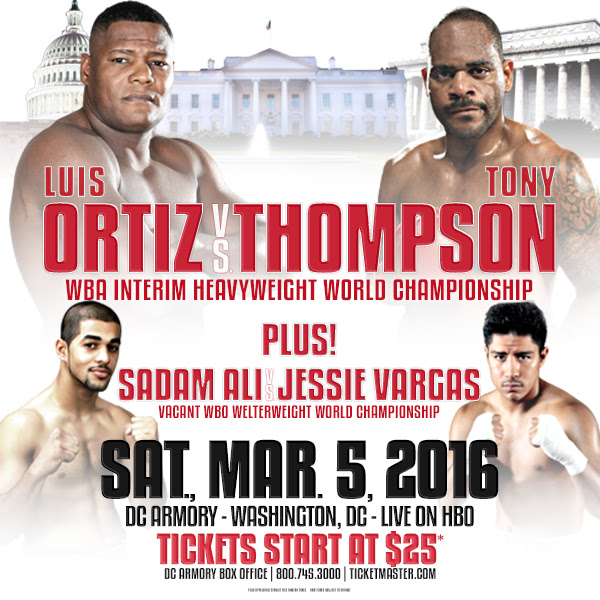 HBO Boxing travels to the nation’s capital for an all-action doubleheader this Saturday with HBO Boxing After Dark Luis Ortiz vs. Tony Thompson and Sadam Ali vs. Jessie Vargas at 10:00 p.m.  from the DC Armory in Washington, D.C. Right here, find the HBO Boxing preview of the doubleheader, along with a series of videos, including the latest Hey Harold segments, as Harold Lederman tackles both fights on the card.

The headlining bout features undefeated Cuban native Luis Ortiz (24-0, 21 KOs) risking his perfect record against veteran Tony Thompson (40-6 27 KOs) in a heavyweight showdown set for 12 rounds. Ortiz, 36, took the division by storm in 2015, compiling three consecutive knockouts over a six-month stretch; most notably, the southpaw handed rising heavyweight prospect Bryant Jennings the first knockout loss of his career. Thompson, 44, will be fighting before a hometown crowd for the first time in more than ten years.

In the evening’s co-main event, a vacant welterweight championship is on the line when Brooklyn’s Sadam Ali (22-0, 13 KOs) takes on Las Vegas’ Jessie Vargas (26-1, 9 KOs) in a scheduled 12-round contest. Ali, 27, has a decorated amateur background, including a spot on the 2008 U.S. Olympic boxing team, and has fought nearly his entire pro career in the northeast, including a 2014 bout at the DC Armory. Vargas, 26, is looking to rebound from his first professional loss last June against world-class performer Timothy Bradley Jr.