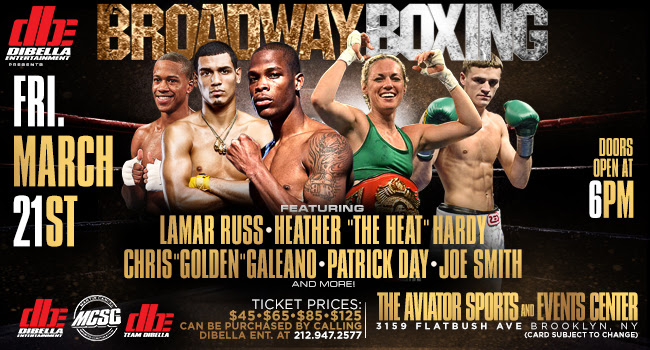 Hardy is set to square off against Bronx’s Nydia Feliciano (7-4-3) in their female junior featherweight matchup, while Russ takes on upset-minded Tony Hirsch (15-6-2, 6KO’s).

The bout on March 21 will be the first for Russ since suffering his first professional defeat at the hands of three-time world title challenger and top-rated middleweight contender Matthew Macklin. Though Russ took the bout on short notice, he was very competitive throughout. Ultimately, he dropped a 10-round unanimous decision to the much more experienced Macklin, in a bout shown live on HBO. The 27-year-old Russ proved that even with just 14 professional fights, he is able to compete with some of the top middleweights in the world and is looking to get his very promising career back on track with an impressive showing against Hirsch on the March 21. Hirsch is no slouch though, and has been in with a number of top fighters during his 23-fight career. Hirsch holds two victories over previously undefeated prospects and has been stopped only once in his career. He’s gone the distance with 2008 Olympians Shawn Estrada and Demetrius Andrade, who is the current WBO junior middleweight champion.

Hardy is coming off of her first scheduled eight-rounder in her most recent bout when she won an absolute war against Christina Fuentes on February 12, at Roseland Ballroom in NYC. Hardy fought four times in 2013, picking up the UBF international female bantamweight title in the process and is looking to be even busier in 2014 as she closes in on her first world title opportunity. In Feliciano, Hardy will face her toughest opponent to date. The Bronx-native Feliciano has been fighting professionally since 2009 and is a former NY State featherweight titlist and International Women’s Boxing Federation bantamweight champion. In 2012, she fought for the IBF bantamweight championship, dropping a 10-round unanimous decision. Feliciano is coming off back-to-back victories, and will be looking to make it three in a row when she takes on the undefeated Hardy.

Returning to action for the third time in just four months since signing with DBE will be hard-hitting light heavyweight Joe Smith (14-1, 11KO’s). The Long Island-native and NY Golden Gloves champion has won eight consecutive fights since his lone professional defeat back in 2010. In that fight, Smith suffered a broken jaw in the fourth-round of his scheduled six-rounder and was unable to continue. Now fighting under the DBE banner, the 24-year-old Smith is looking to steadily move up the ranks of the light heavyweight division. In his way will be battle-tested fellow former New York Golden Gloves champion Newton Kidd (8-8-2, 5KO’s). Despite his record, Kidd will be no pushover for Smith. Kidd has been on the wrong end of many bad decisions during his career, including a split decision loss to former WBA light heavyweight world champion Lou Del Valle. The bout between Smith and Kidd is scheduled for eight rounds in the light heavyweight division.

Another featured bout on the card will see highly regarded junior lightweight Joel Diaz Jr. (14-0, 12KO’s) put his undefeated record on the line against 67-fight veteran Jose Angel Beranza. The 21-year-old Diaz Jr. comes from a family rich in boxing history. His father is renowned boxing trainer and former contender Joel Diaz Sr. (trainer of Timothy Bradley), and he is the nephew of former titlists Antonio and Julio Diaz. A standout amateur before turning pro in 2010, Diaz Jr. has continued to impress with each outing. Eight of Diaz’ 12 career knockouts have come in two rounds or less, with six coming in the very first round.

Fighting in separate bouts on the card are DBE’s former #1-rated U.S. amateurs and now undefeated junior middleweight prospects Patrick Day (6-0-1, 3KO’s) and Christopher “Golden” Galeano (2-0). Both Day and Galeano won national, regional, and NY Golden Gloves championships and are now are two of the bright young stars on the DBE roster. Day is set to square off against Duane King (4-2, 2KO’s) in a six-round junior middleweight matchup, while Galeano, who is co-promoted by 50 Cent’s SMS Promotions, will take on Azamat Umarzade in a scheduled four-round contest.

Also seeing action on the card will be highly regarded former amateur standout Eduardo Alicea (5-0, 3KO’s) who takes on once-beaten knockout artist James Johnson (7-1, 7KO’s) in scheduled six-round middleweight attraction. The 23-year-old Alicea had an astounding amateur career, which saw him compile a 215-16 record on his way to becoming a six-time national champion and winning gold at the 2007 National Junior Olympics in which he was voted the most outstanding fighter by USA Boxing. Like Alicea, Johnson was a successful amateur, winning the 2004 US Amateur Championship before turning pro and reeling off seven consecutive knockout victories. Johnson then dropped a decision to Darnell Boone before stepping away from the ring. Johnson is now looking to throw his name right back into the mix of prospects to watch when he takes on the promising Alicea.

Rounding out the card will be 2011 US Olympic Team Trials silver medalist and the 2012 NY Golden Gloves heavyweight champion Joseph Williams (1-0, 1KO) squaring off against P.J. Cajigas (1-3, 1KO) in a four-round light heavyweight matchup. The Far Rockaway-native Williams got a late start to boxing, but has quickly progressed and just missed out on the opportunity to represent the US in the 2012 Summer Olympic Games.