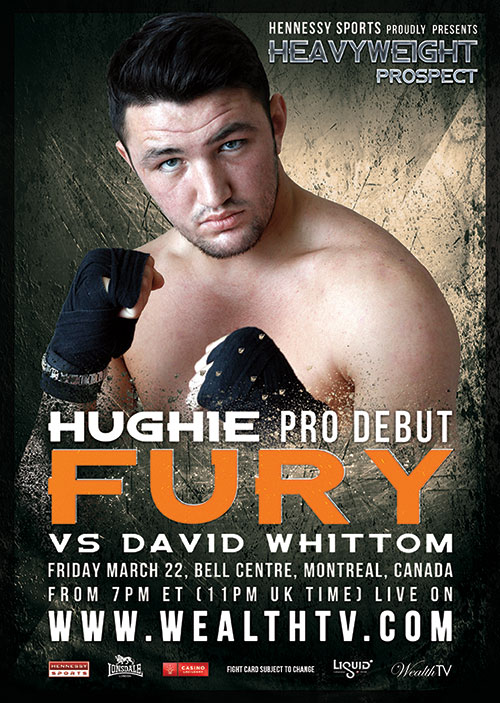 Heavyweight prospect Hughie Fury will have a substantial height and weight advantage for his professional debut tonight at the Bell Centre, Montreal, Canada, live on WealthTV. The 18-year-old prospect weighed 234.4 pounds at Thursday’s official weigh in, with his opponent David Whittom, 34, weighing in at 207.8 pounds. Fury is the cousin of undefeated Tyson Fury.

There are certainly high hopes for Hughie, who, standing at six-feet and eight-inches, has a seven-inch height and 26.6 pounds weight advantage over Whittom.

The pair meet on the undercard to IBF #1 super middleweight, Adonis Stevenson, looking to avenge his only professional loss against Darnell Boone at the Bell Centre, Montreal.

Stevenson fought through a left hand injury to force a 12 round TKO of Don George in his last contest and has been promised the winner of the IBF/WBA unifier between Carl Froch and Mikkel Kessler on May 25.

Also on the card will be Eleider Alvarez (11-0, 7KO) and Nicholson Poulard (19-3, 9KO) fighting for the WBO NABO and NABA light heavyweight title.

Live coverage of the card starts at 7 p.m. ET. The fight can also be seen on WealthTV.com (excluding Canada) by signing up for an account.

“We are excited Hughie Fury is on the card and that his fans from home will be able to see him,” Tommy Morris, Director of Live Events for Wealth TV said.

“We have had Tyson Fury on our network in the past and we know Hughie will be just as exciting to watch.”

Team Fury have set up base at Casino Lac-Leamy, Gatineau, Quebec, Canada, with both Hughie and Tyson preparing for their upcoming fights.