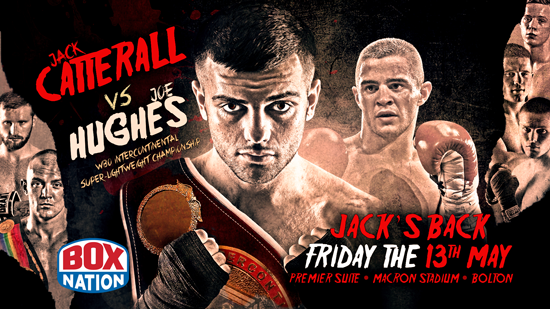 Joe Hughes is set for his WBO Inter-Continental challenge this Friday against Jack Catterall, who has been installed as a prohibitive 12-1 favorite to retain when he tops the bill for the first time at Bolton’s Macron Stadium.

However, West Country chancers will be very eager for a slice of the 8-1 on offer for Smokin’ Joe in a fight that doubles as a final eliminator for the British title.

‘I’ve been fighting a lot longer than Jack Catterall has,’ warns the 25 year old four time national junior champion who has conceded just once – controversially – in 15 paid gigs.

‘Catterall’s three years younger than me, has had less pro fights and boxed (26) less pro rounds. I’ve gone 10 rounds four times as a pro, Jack just once, and he didn’t achieve anything like as much as I did as an amateur.

‘I’ve been fighting all of my life, in gyms from when I was five or six years old. Since birth, I had a problem with my right shoulder called Erb’s palsy, nerve damage.

‘As part of my physio, I was encouraged to do martial arts. I preferred the punching to kicking so gravitated to the Malmesbury amateur boxing club around the age of eight.’

Over the ensuing decade, despite his impediment, Hughes evolved into one of the most decorated amateurs to emerge from the Western Counties.

He recalls: ‘I had the first of my 70 bouts at 11 and won the English schools, junior ABAS plus two national CYP titles as a junior. I also bagged Four Nations and Three Nations gold medals. I beat Tommy Langford and Jamie Kavanagh, went one and one with Ronnie Heffron and lost very close fights to (reigning British champs) Bradley Skeete and Tyrone Nurse.

‘I represented England several times and won the senior ABAs in 2010 whilst still a teenager beating Manchester’s Liam Taylor, a well regarded kiddie, in the final.

‘The England selectors had told us that whoever won the ABAs would go to the Commonwealth Games in India but then Team GB got involved and (world bronze medallist) Bradley Saunders was slipped in ahead of me. Having achieved everything on the domestic scene, I thought it best to go pro.’

Initially signed to Frank Maloney, hitman Hughes conceded his unbeaten tag in his fifth outing when 6-0 Moroccan Joe Elfidh edged him out over six rounds in Sheffield.

‘I really don’t think I lost because I dropped Joe in the opener and felt I won the first four rounds before conceding the last two. Stupidly, I hid a virus from my team because, being a fighter, you just want to fight,’ admits Joe.

‘It was close and all credit to Joe but I still sort of feel unbeaten. The experience taught me to be honest with my team and just motivated me more.’

Catterall, unbeaten in 14, is rightly feted as one of the nation’s finest prospects at any weight but one senses Hughes will land as a very lively underdog.

‘Jack’s very good – strong and skilful – and deserves all the credit he’s getting but that just makes me want to fight him more. I want to go as far as I possibly can in the game. I’m looking forward to challenging myself against him,’ says Hughes who has stopped six of 14.

The Wiltshire wonder has no qualms about confronting a Lancastrian in Bolton.

‘Malmesbury is right in the countryside – population roughly 4,000 – about 30 miles from Bristol and 20 from Swindon, the nearest town. It’s the forgotten area. Us West Country lads were definitely overlooked in the amateurs and it’s similar in the pros,’ he claims.

‘I boxed away all the time as an amateur and my early pro fights were dotted all around the country.

‘So boxing on Jack’s patch certainly won’t be a problem. In fact I’m looking forward to it. There’s no pressure with regard to selling tickets like there is fighting at home.

‘I get plenty of support when I box locally but there’ll not be many of mine there Friday. It’s a day off work plus travel and ticket expenses. Some say they can’t get anyone in to milk their cows!’

Fans who’ve yet to see Hughes operate can expect a highly driven, physically powerful pressure fighter who aims to please.

‘I’m most comfortable coming forward and I like to land a lot of shots,’ he says.

‘As a fan myself, I like to deliver action, I like the crowd to be excited. Jack also likes to attack and take his opponents out so I expect it to ‘kick off’ from the start. Our styles should gel nicely. It’s going to be explosive.

‘Because of my shoulder problem, I mostly like to use my left hand, jabbing and hooking. The right arm is three inches shorter and quite a bit weaker. I’m the only pro fighter with a disability but, rather than viewing it as a disadvantage, I’ve turned it on its head. Battling it gives me real ‘attitude’.

The Western gunslinger knows that Friday’s fight presents his opportunity to gatecrash the Big Time and he has prepared accordingly.

‘Having won Area, International and English titles, I’d intended progressing to the British, Commonwealth and possibly European. But if I beat Catterall, I’ll take his WBO ranking (four) and be eligible for a world title. I’ll fight any light-welter in the world.’