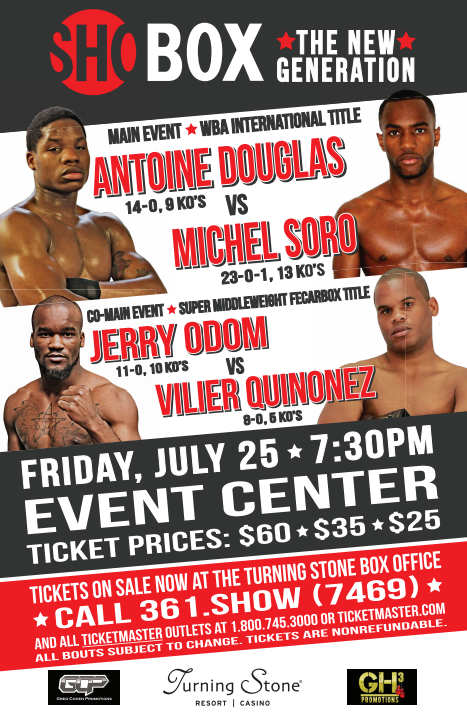 The three-fight undercard has been announced for this Friday’s landmark 200th episode of “SHOBOX: The New Generation,” live from Event Center at the Turning Stone Resort Casino in Upstate New York. Headlining the un-televised portion of the historic evening will be Brunswick, New Jersey’s tough “King” Jorge Diaz (17-3, 10 KOs), who will be looking to return to the win column after a couple of setbacks against top-level opposition.

In the night’s main event, undefeated middleweight prospect Antoine Douglas (14-0, 9 KOs), of Washington, D.C., will take a big step-up in opposition when he faces once-beaten, former world title challenger Michel Soro (23-1, 13 KOs), of France by way of Ivory Coast, in a 10-round bout.

The co-feature showcases a matchup of undefeated-yet-untested prospects, each taking an important step. Hard-hitting super middleweight prospect Jerry Odom (11-0, 10 KOs), of Washington, D.C., will take on Cuban amateur standout Vilier Quinonez (8-0, 5 KOs), of Miami by way of Cuba, in an eight-round match.

A pair of four-rounders will top off the action as Philadelphia’s undefeated Sam Teah (4-0, 2 KOs) will face also undefeated Lavisas Williams (4-0-1, 3 KOs) of Rochester New York; and featherweight Glenn Durzum (3-0, 2 KOs) of Baltimore, Maryland, will take on Nycedric Ellis (0-1) of Raleigh, North Carolina.

26-year-old Diaz lost just one of his first 18 fights before running into Dominican bomber Yenifel Vicente (TKOBY 6) in June and undefeated Luis Rosa (L8) in January of this year. Once thought of as one of boxing’s hottest young prospects, Diaz will be looking to regain some of his once surging momentum against Ellis.