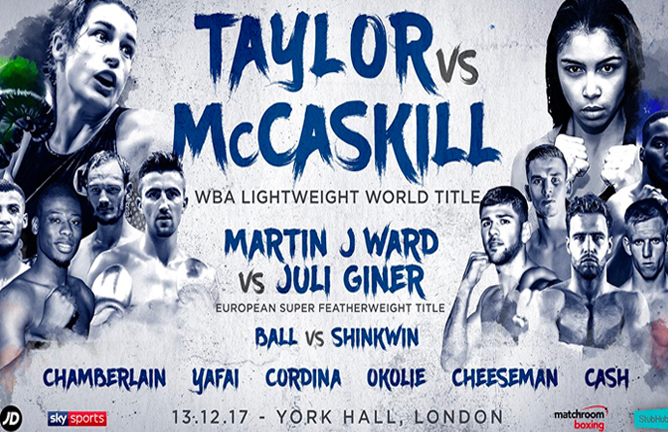 Josh Kelly and Conor Benn will aim to end a stellar year on a high as they taste action at a sold-out York Hall, Bethnal Green on Wednesday December 13, live on Sky Sports.

Kelly will look to end his first eight months in the paid ranks in style in his first four fights and ends 2017 with a real step-up in his first ten round action against experienced Frenchman Jean Michel Hamilcaro.

“Adam Booth and Eddie Hearn tell me what to do – I just keep working hard,” said Kelly. “I don’t call people out I just do my job in the ring and graft in the gym. I’ve been alongside Ryan Burnett in the gym and I’ve seen what needs to be done to reach the top and I’m ready to put that work in.

“People are talking about European and World titles for me and I’m only 4-0 and just 23 years old, there’s plenty of time but I’m excited about where we’re going. “My fitness is there, I’m starting to turn into a man, so I want big fights and I am confident that when I land them I’ll win them.”

Benn made a splash Stateside in his last outing earlier in the month, securing an eighth win inside the distance on his US debut in New York, moving to 10-0 in the process.

“I felt ready to go again right after the win in NYC so it’s great to be on another bill before Christmas,” said Benn. “America was a great experience and a new experience, and one that’s going to stand me in good stead for the future.

“I’m right handed but I’ve been putting people away with the left hand and that shows that I’m developing good power and that I’m learning in the gym with Tony every day.

“I suffered a bad injury and was out for seven months, but in hindsight it’s been the best thing for me. I used that time to work on my skills and learn my craft, and I’ve won all my fights since that lay off by KO and that’s down to my hard work.

“I didn’t have any amateur background but I’m being compared to the GB boys as an equal or even more exciting. I’ve only been a pro for 18 months and for eight of those months I was on the sidelines injured, so it’s scary to think how far I can go if I keep working hard, and I am going to stay dedicated to the sport.”

Benn and Kelly star on a huge night of action in east London, topped by Katie Taylor’s first defence of her WBA World Lightweight title against American Jessica McCaskill.

Martin J. Ward can add European glory to his recent British and Commonwealth triumphs when he faces Juli Giner for the vacant Super-Featherweight strap while Jake Ball and Miles Shinkwin clash for the WBA Continental Light-Heavyweight title.