It was a controversial night at the SSE Hydro in Glasgow, as Josh Taylor held on to his WBC, WBA (Super), IBF and WBO super lightweight titles with a split decision win over the unfortunate Jack Catterall.

Taylor became undisputed champion last year, taking a points win over Jose Ramirez to add the WBC and WBO belts to his WBA (Super) and IBF crowns, while Catterall had been patiently waiting for his shot for some time, stepping aside as WBO mandatory challenger to allow Taylor v Ramirez to take place in Las Vegas. The Chorley man had served as the organisation’s Intercontinental champion from 2015 to 2018. This contest was slated for late last year, but a combination of Taylor suffering a knee injury and then contracting COVID pushed the fight back.

After an even first two rounds, Catterall started to find his groove, using his movement, and in particular his shoulder to good effect. By halfway, Taylor was struggling, with the challenger landing the cleaner shots and not letting the Scot into the contest. There was a landmark moment in the eighth too, as Catterall floored Taylor with a left hand that seemingly gave the champion a mountain to climb to claim victory.

Taylor rallied to take the ninth, and was aided by a points deduction for Catterall in the tenth for holding, but that advantage was taken away a round later, as Taylor was deducted a point for punching after the bell. It looked as though ’The Tartan Tornado’ needed a knockout to retain his gold going into the final frame, and after a scrappy last round that Taylor seemed to edge, the fight went to the scorecards.

To everyones amazement, Taylor received scores of 114-111 and 113-112 in his favour, meaning a 113-112 tally for Catterall was redundant. Taylor ruled out a rematch post-fight, and is likely to move up to welterweight.

The card saw an appearance from double Olympic champion Robeisey Ramirez, and the Cuban needed three rounds to see off the challenge of Eric Donovan. The Irishman was floored in the first round, cut over his eye, and was eventually stopped by a left hook to the head as Ramirez improved to 9-1.

Nick Campbell claimed the vacant Scottish heavyweight title, as he stopped the brave Jay McFarlane in seven rounds. McFarlane was down from a right hand to the head, and was stopped shortly after. 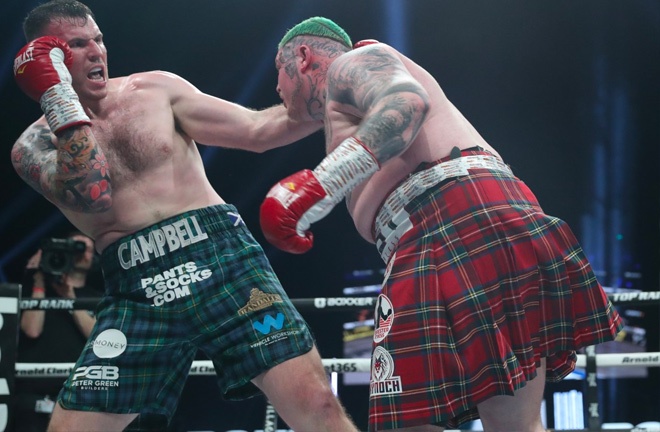 Irish welterweight Paddy Donovan stopped Miroslav Serban in the sixth and final round, while Mark McKeown dropped Angel Gomez in the first round on the way to a points win at featherweight. Bilal Fayaz scored win number two, stopping Malam Varela in three. Ebonie Jones was held to a draw over six by Eftychia Kathopouli.

There were stoppage wins for each of the three debutantes on the bill. Scott Forrest stopped Erik Nazaryan, who was unable to continue with an injured arm in the second of their cruiserweight encounter, and Kieran Molloy did the same in his super welterweight contest with Damian Esquisabel. At featherweight, Kurt Walker turned over and scored a one round win over Jaroslav Hriadel.