And so it came to pass at the Turning Stone Resort & Casino in Verona, New York that the undefeated and undisputed Champion of the sport will always be Father Time.

This proved true again, as Cletus Seldin stopped former two weight World Champion, Zab Judah in eleven mostly one sided rounds, with Judah a shell of his former self.

The aftermath of the contest has reportedly left Judah fighting for his life following a bleed on the brain. This comes not long after Adonis Stevenson suffered the same injury after losing his WBC Light Heavyweight Title to Oleksandr Gvodzyk in 2018. Pictures have been posted to Social Media with Judah in a hospital bed up and talking, which are obviously positive signs.

Judah made a bright enough start in the first round of the fight, but that was about as good as it got for the Brooklynite.

It was hard to give Judah another round, as Seldin repeatedly kept coming, with Zab rocked badly in the third, reviving memories of his famous knockdown against Kostya Tszyu all those years ago.

Judah looked gun shy, and was struggling to get his shots off, as well as to keep the relentless Seldin off him. Judah was reduced to holding and grappling with Seldin to stay in the bout.

He couldn’t see the fight through to the end though, as in round eleven, Seldin turned up the heat, and fired an unanswered multiple punch salvo that forced referee Charlie Fitch to intervene.

At 41 Judah could only have been in the ring for financial reasons, and it was sad to see him in such decline from what he once was.

Fans and former fighters alike have paid tribute to Judah, and we, like everybody else pray for a full recovery for what is surely a future Hall of Fame fighter. 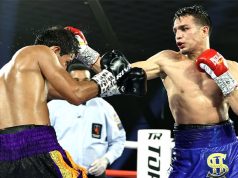 EXCLUSIVE: Joe Frazier, The Brother From Another Mother