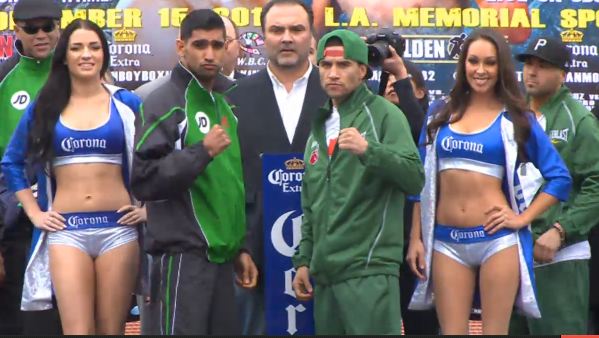 The official weigh-ins for Golden Boy’s stacked Saturday of boxing on CBS and Showtime were held on Friday afternoon. On CBS, Leo Santa Cruz headlines, and defends his title against Alberto Guevara, while USA Olympian Joseph Diaz makes his debut. Later on Showtime, Amir Khan returns to action and meets the undefeated Carlos Molina as he seeks to climb back up the rankings. There’s also a whole load of additional undercard fights. Check out the official Santa Cruz vs. Guevera and Khan vs. Molina weigh-in results and photos right here.

Khan vs. Molina Weights on Showtime

As you can see, it really is a loaded day of boxing action from Golden Boy, airing across three networks – first on CBS, marking boxing’s return to network television for the first time in decades, then on Showtime Extreme, and finally on Showtime. Big names, exciting fights, prospects on the rise and more, it has something for everybody.

Khan had his usual large contingent of traveling fans with him, and chanting him on, and there was a good deal of support for the rest of the fighters as well as fans checked out the weigh-in festivities.

Thanks for checking out our official Santa Cruz-Guevera and Khan vs. Molina weigh-in results and photos and check back with us on Saturday for post-fight coverage and much more.