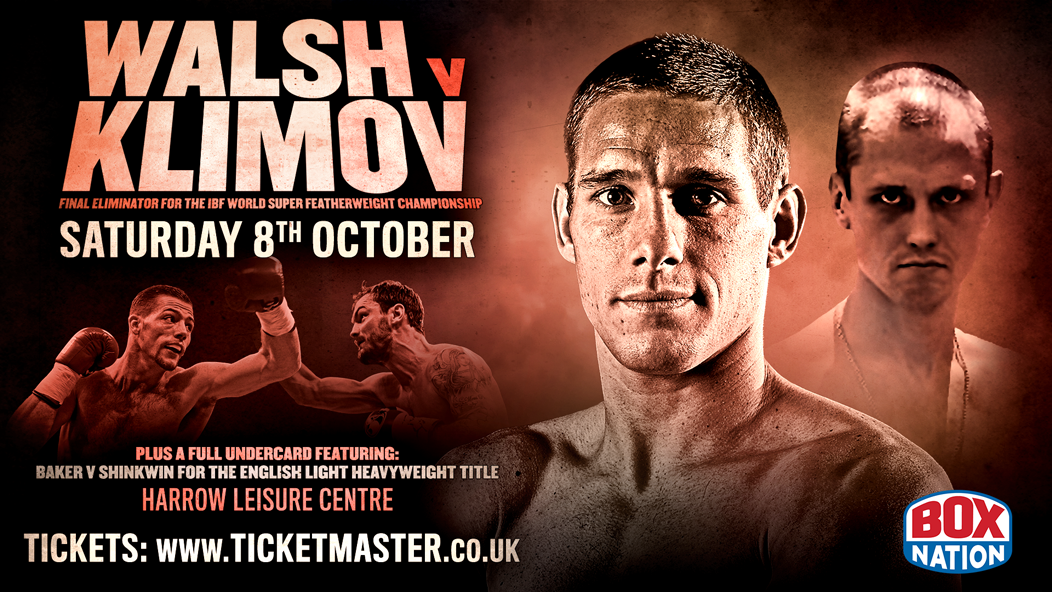 Cromer’s Liam Walsh (20-0; 14KOs) will face Russian Andrey Klimov (19-2-0; 9KOs) in an eliminator for the IBF Super Featherweight title on Saturday October 8th at Harrow Leisure Centre. The fight will top an action packed bill promoted by Frank Warren and Andy Ayling which will be televised live and exclusive in the UK on BoxNation.

Klimov, a California resident, made an unsuccessful challenge to reigning IBF World Super Featherweight Champion Jose Pedraza last year, but is set to be the toughest test of Walsh’s career which has so far seen him lift the British and Commonwealth Super Featherweight titles and the WBO European Lightweight title.

Walsh comes into the contest fresh off an 8 round TKO win over Troy James at the Copper Box on 30th April in defence of his British Super Featherweight title.

Should the Cromer man emerge victorious in Harrow, it will be the culmination of a long road back to a World title shot, after a car crash halted plans for Walsh to challenge former WBO Lightweight Champion Ricky Burns back in 2012.

Walsh said: “I believe it’s my destiny to become World Champion and I’m now within touching distance. I’ve dedicated my whole life to boxing and now it’s time to go to the next level and reap the rewards.”

The undercard for Walsh v Klimov will feature Tom Baker’s English Light Heavyweight Title defence against Miles Shinkwin. Long term rivals Baker and Shinkwin are set to face off in a long touted showdown between the Queensberry Promotions stablemates after Andy Ayling won the purse bid for the contest earlier this month.

Also on the undercard will be Harrow’s own Mitchell Smith, who looks to get back to winning ways and back on track after an absence caused by injuries. Whilst his brother Jez Smith will also be in action on the card.